Timur BASHKAEV. From a horizontal city to a vertical one

architect, head of the TBAB, professor of the Moscow Institute of Architecture

Renovation development program is an intensive strategy of city development, which implies a more efficient use of urban land. As development density increases, the city must compensate residents by improving quality of life. All architectural planning solution must do just that – improve the quality of life of Muscovites.

The city center should evolve following the growth of the agglomeration. But the Moscow city center has limited development potential. This is due to the Moscow’s history, road density, which is half that of Central Europe, and presence of many restrictions, including exclusion zones. The center in its historic borders is unable to meet the agglomeration’s growing demands. Therefore, the center will quit its historic place and gradually shift to the median zone.

At the same time, it should be noted that although the number and quality of urban functions is gradually increasing in Moscow, it still lacks some of the most important functions developed in other cities for creating a more comfortable environment.

What is the main function of a city? To provide the maximum number of services of greatest quality as quickly as possible. These three maxims make the city the Agglomeration Center. The number of services and their promptness are directly related to the density and accessibility of the center. 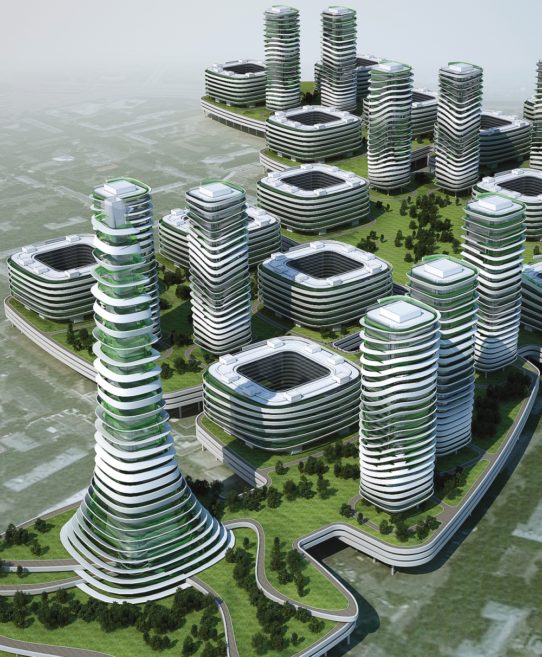 An agglomeration is the same city, but at the modern stage of high-speed transport development. The MCC links the agglomeration’s high-speed transport – radial railway and Metro lines. The MCC and TIC traffic network has great potential for the development of Moscow’s median zone as a new center. The area adjacent to the MCC and TIC is now being analyzed in terms of building modern housing developments and community center functions.

Due to its industrial past the Moscow median zone has a very low density – max. 5,000 cu. m /ha – which is several times less than the density of European cities. For comparison: the density of the center of Paris is 30,000 m2/ha, while for the center of Moscow it is 15,000 m2/ha. With the further expansion of the agglomeration, this becomes a serious problem. The city is developing outlying district, spending huge amounts on expanding transport and utilities. But the vast median zone is used inefficiently.

However, it is impossible to solve the median zone density problem with community centers alone. It is very large, and community centers will occupy a small part of it; most of the area is planned for residential housing. The city has defined the parameters and format of new residential areas. And it is important to understand that if all standards are met in a housing development, then the maximum density is 25,000-30,000 m2 /ha for neighborhoods and about 15,000-16,000 m2 /ha for entire development. Once again the density is 15,000 m2 /ha, and this is very low density for Moscow’s median zone. This urban development model is outdated, so we will fall behind the developed large cities. 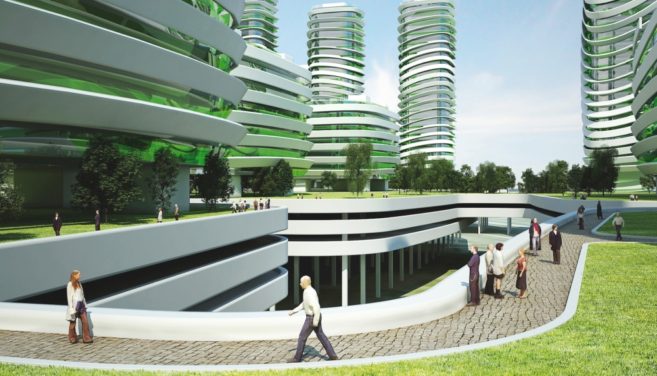 Only a compact city is competitive; it forms the number of consumers who can pay for the development of this city. A non-compact city cannot pay for its development and ceases to correspond to the values of advanced citizens. That is why the renovation program is moving in the right direction by densifying the city and its functions, but this density is insufficient for sustainable development.

The actual paradigm is a «horizontal» city. A separate urban area is assigned to each function of the city, whether it is housing, road networks, landscaping, parking, services or underground utilities. One function – one section of the city. Even with comfortable residential neighborhood development and compact, even high-density community centers, the median zone density will be lower than the average densities of European cities. Densifying the city within the existing paradigm of «horizontal» city, inevitably leads to a loss of quality of life due to the reduction of free urban spaces, the quantity and quality of landscaping.

Today, a transition to a new urban paradigm of «vertical» city is necessary to allow the formation of zones of multi-functional high-density development, combining residential and public functions close to transit hubs. 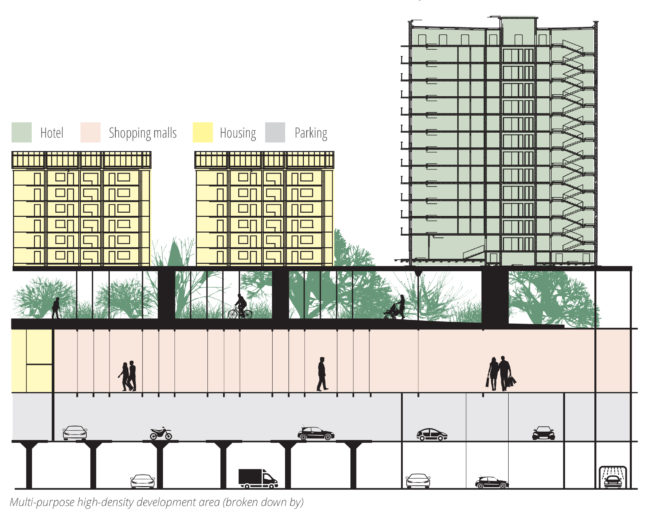 The key idea of an alternative urban planning concept is turban development that considerably increases the comfort of residents. How is this achieved? By creating multi-level platforms in which the zero and first levels will be allocated for traffic, parking, business centers, schools, kindergartens, etc. The upper levels will be continuous landscape, free of transport and used by city residents. The qualitative feature of this landscape is full-fledged greening, rather than a simple lawn. The design of this type of environment is well known and widely used. The top levels can be allocated for both housing and office centers.

Thus, we can accelerate development of the agglomeration, increase the density of the median zone and improve the quality of life. As a result, Muscovites will obtain new humane living environment.