What do residents think about the decision of the authorities to implement the program for resettlement of five-storey apartment buildings? What are the factors of positive and negative attitude towards the project? What do Muscovites know about the guarantees provided within the scope of the renovation program? Answers to these and other questions were obtained during the social research conducted by the Russian Public Opinion Research Center.

The research was conducted in May 2017. A total 1,600 Moscow resident aged 18 and older took part in a city-wide representative poll. Another 600 residents were interviewed during an additional poll conducted among those directly involved in the housing renovation program. The statistical error is less than 2.5%.  The qualitative stage of the research, i.e., six discussions among focus groups, also took place in May 2017.

After being announced by the authorities, the housing renovation program in Moscow sparked a massive response: almost all Muscovites and residents of the districts affected by the renovations heard about it. The majority of respondents across Moscow and among residents of renovation areas say this program is relevant and timely.

The level of support for the housing renovation program among informed Muscovites is generally high (67%) and is even higher (above 80%) among those who live in five-storey apartment buildings included in the program. Factors of a positive attitude to the project are identical for both groups which participated in the research. The dominant factor is to ensure the safety of people (the critical condition of the buildings, or shabby housing). According to the research participants, the renovation program will also help to improve the living conditions of Muscovites and the architectural look of the city and raise the level of amenities in the renovated districts. 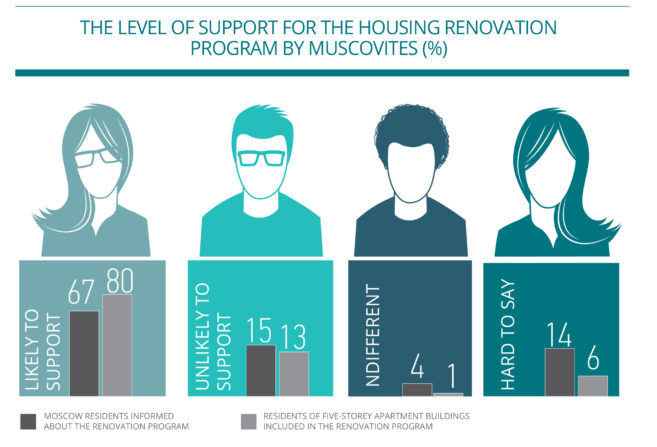 Among those against the renovation program are 15% of all people interviewed in Moscow and 13% of people who live in the renovation districts. Well-informed respondents give good condition of the buildings that were included in the program, the need to relocate to another district, the flaws in the program in general and the violation of ownership rights as the main reasons for their disapproval. There is also concern over the low quality of new apartment building, the degradation of environmental conditions, the lack of required infrastructure, and the issue of transport availability.

Request for information regarding implementation of the project. The program participants – both supporters and opponents – are mainly interested in getting information about the location of their future home, a detailed schedule of the program, and the layout of the district and the new apartments. The interest of the participants in obtaining this information is especially strong among opponents of the program. Alternative sources of information, such as social media, Internet forums, correspondence and conversations with friends and acquaintances are more important for them.

Awareness of the guarantees. Most of the people who live in five-storey apartment buildings that were included in the renovation program are aware of the guarantees being provided. Both supporters and opponents mainly remembered the following information among the accepted guarantees:

These guarantees are the most important ones for all participants in the renovation program.