Sergey Levkin he trained as a builder at the Leningrad Higher Military Institute of Civil Engineering, and received a doctoral degree in management after graduating from the American University of Management. He has many years of experience in various positions in large companies and public service. He has been head of the Moscow Department of Urban Planning Policy since 2011. Full State Advisor 1st class of the city of Moscow. Honorary Builder of Russia. Awarded the Medal of Honor.

The main task of the Moscow housing renovation program is to upgrade housing built in the capital in the 1950s and 1960s. Today, 45-60% of these buildings are already dilapidated. If we had not started the project today, within 10–15 years, a lot of the capital’s real estate would have been relegated to substandard housing. In this case, the residents would have been relocated under federal law, which has none of the protective mechanisms that are now being proposed by the Moscow Government.

Thanks to the renovation program, Muscovites who live in worn-out and obsolete Khrushchev-era apartment blocks will be provided with comfortable modern apartments. Development of new neighborhoods will be integrated in all respects, and housing will be provided with social facilities. New commercial properties will come on the market on the ground floors, which will be located in all housing built under the program, and will be effectively built into the small business system. At the same time, modern neighborhoods, parks, and cycling and pedestrian infrastructure will appear in the city.

Moscow Mayor Sergey Sobyanin has signed a law giving additional guarantees to participants in the program for resettlement from five-storey apartment blocks. It regulates the procedure for including apartment buildings in the program and receiving housing, the quality of new buildings and apartments, the requirements for creating a comfortable urban environment, assistance in moving, and compensation to owners of commercial properties. Overall, the Moscow Government has offered very advantageous conditions for program participants.

The key aspect of the housing renovation program is social and public, rather than urban development. The comprehensive project is associated with people, their place of residence and work, their future and their children. The program was offered to Muscovites based on their requests. This is why from the first day the project was announced, Moscow developed the program taking public opinion into account. The residents of each specific apartment building made a decision on whether or not to participate in the program. As a result, the project was approved by the vast majority of city residents, who also appreciated the balanced, mutually respectful approach to discussing it. 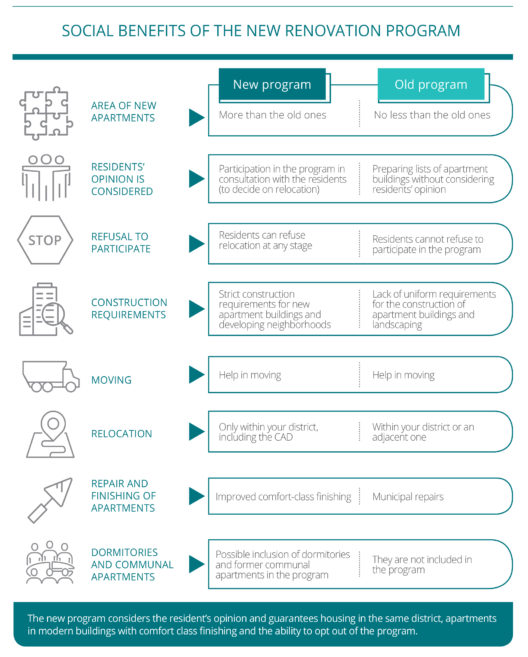 The renovation program is being implemented as a social project with funds from the city budget. The Moscow Government, acting through the Moscow Construction Department, exercises authority as the sole founder of the Moscow Housing Renovation Fund that has been set up. The cost of the program is estimated at 3.5 trillion rubles, with 300 billion rubles allocated for the first phase. This amount will secure all guarantees the authorities have given to Muscovites for implementing the program. The comprehensive resettlement project for five-storey apartment blocks is designed for a minimum of 10-15 years and will affect more than 1.5 million residents. The renovations will cover more than 5,000 apartment buildings and approximately 350,000 apartments. More than 15 million square meters of housing will be built under the program. During the first five years of the program, nearly 120,000 Muscovites will be moved from outdated apartment blocks to new housing developments.

The  implementation plan involves phased resettlement. This means that the first relocated residents will go to new, already finished apartments. To ensure a quick start to the housing renovation program, there are plans to use 12 finished apartment blocks with an area of 150,000 square meters that were previously built under the state Housing program. These buildings are located in three administrative districts: Northern, Eastern and Western.

The apartment layout in these buildings is close to what is required for the resettled residents. Finishing of the apartments and landscaping are currently being brought into line with the standards approved by the city government. When this work is completed, residents of five-storey apartment bblocks scheduled for demolition will be encouraged to relocate there. The first residents may be relocated by the end of this year or early next year.

Residential buildings for next movers will be built on the site of their demolished homes. More than 200 startup sites have been selected in all Moscow districts. What was important for the city when selecting these sites was first, the location of the land within the renovation area, except Troitsky and Novomoskovsky and Zelenogradsky Administrative Districts, where resettlement is possible within the boundaries of the administrative district. This secures one of the main guarantees of citizens’ rights to housing during implementation of the program – a guarantee of receiving equivalent living space in the district of residence; second, the opinion of city residents following meetings with representatives of the prefectures; and third, the urban development potential of the site for implementing the program as quickly as possible.

An important factor when choosing the first sites was the existence of minimum encumbrances on the chosen land. In other words, we want to preserve as many green spaces as possible, minimize the shift of existing utilities, and not drag out the resettlement period.

Along with this, we worked on further development of the area. Laws and regulations for the renovation program will be in place by January 1, 2018, and all the necessary urban planning documentation will be ready by August 1, 2019.

Along with the construction of new apartment blocks, the required transportation, social and utility infrastructure will be built, and parking spaces will be provided. These program implementation stages will be determined no later than December 31, 2019. The stated vision must be followed and neighborhood development with private areas, yards without cars and playgrounds must be created. 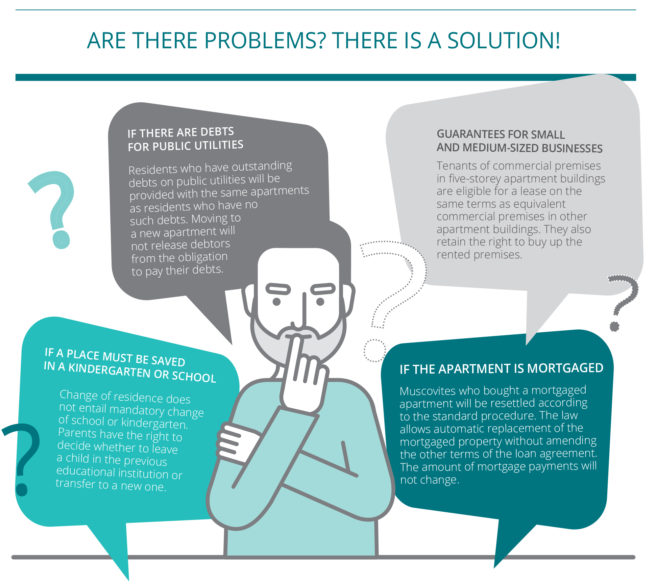 In addition, the neighborhoods where housing renovation program participants will be relocated will be based on the Smart City principle. We have maximized the standard of comfort not only for the finishing materials being used, but also for essential residential services: safety, energy efficiency and accessibility. All of this together affects rates and payments, and simply comfort of living. Remote access to electrification, heat and water supply systems will make a neighborhood «smart». We are actively working with the Department of Information Technology on bringing the new neighborhood up to the Smart City standard.

More importantly, planning new neighborhoods fits in well with the strategy for expanding the capital’s transportation system. The traffic network will be changed as part of the planning project. Trolley bus, bus and tram stops will be as close as possible to the new housing, and taxi stands will be moved.

In addition, the transport strategy that has been implemented for the past six years in Moscow, including the Metro, Third Ring Road, and North-West and North-East Expressways, is remarkably close to the neighborhoods being renovated. This is a real advantage for the housing renovation program.

There is also a unique opportunity to eliminate disparities in Moscow that have accumulated over many decades. The main one is that jobs are concentrated in the city center, but people live mainly in the suburbs. Renovation will bring the place of residence closer to work and vice versa.

The new urban development megaproject will improve housing indicators for residents and increase its availability. Residents will move into modern housing built according to the new construction standards. It will be convenient for young families with children, the elderly and people with limited mobility. Clear standards for development of the area will have a positive impact on the price of new housing, and will create more jobs and attract investments.

At the same time, there is no evidence that renovation will divert resources or disrupt other urban development programs. Moscow builders have enough resources for  construction of the Metro, expansion of road infrastructure, and construction of social facilities. All of these projects remain a priority in Moscow’s comprehensive development program.