The main task of the Moscow housing renovation program is to add new areas to the city. During implementation of the integrated project, the approach to creating living space will be radically changed. We are moving from residential communities to a rational neighborhood principle that has long since proven its functional viability in the world.

The new regional urban planning regulations (RUPR) form the basic set of rules for construction of a modern city. The substance of the regulations is to create a structure and network of neighborhoods, the ability to move in all directions, and to ease traffic. Thus, it makes sense to redistribute infrastructure without reducing it.

The so-called urban block, which includes residential buildings, adjacent areas and integrated and attached maintenance services, is taken as a basic element of neighborhood development under the renovation program. It is crucial that according to the RUPR, a residential community cannot have a radius of more than 500 meters, a district cannot be more than 300 meters in radius, and an urban block cannot be more than 100 meters in radius. This guarantees that infrastructure will not be far from residential buildings anywhere. That is, two indicators will be guaranteed – availability and security. 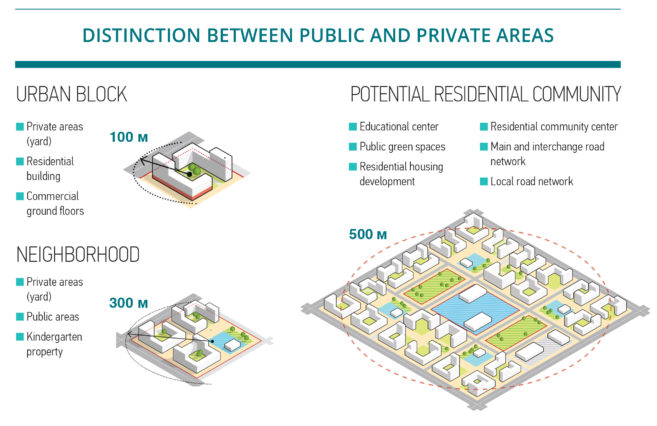 A neighborhood can consist of up to four urban blocks. These units do not have to be square; an urban block may be round or triangular. The main point is that the outer and inner perimeters are always allocated within the neighborhood, i.e., public and private spaces.

With this clear delimitation, green and landscaped yards are intended only for residents of the urban block. This area is closed to outsiders by the configuration of the buildings. It is a private space intended for quiet relaxation, and is free of transport.

Public areas are allocated within the neighborhood and include children’s playgrounds and sports fields, pedestrian and walking areas with flower beds, benches and swings, dog walking places and public utility sites for garbage bins and parking lots.

Many residential neighborhoods are now connected by service roads that are used as through roads. They are actually winding access roads and turning circles clogged with cars on which it is nearly impossible to drive through the neighborhood. Additional through roads and district roads appear when new neighborhoods are built, along with normal transport drainage; and most importantly, the road network will become the basis for the neighborhood structure of the residential community. From the new city streets, it will be convenient to drive up to the entrances of the apartment buildings; that is, the building will have both yard and street approaches.

Priority will be given to landscaping both private and public areas. Landscaping yards and public areas for the convenience of pedestrians and simple relaxation in the form of boulevards, squares and separate green recreation areas, as well as landscaping of common areas, will be strictly regulated. Green spaces within the neighborhoods will help make Moscow a green and environmentally friendly city in the near future. A system of public spaces in the districts will increase the availability of infrastructure.

In recent years, Moscow has set a very high standard of living with new common spaces, such as parks, streets and pedestrian areas. It is important not only to maintain but also to build on this trend, including in the renovation program. 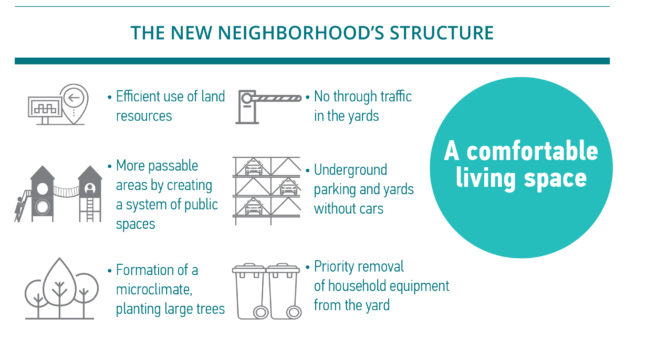 Space planning of the renovation area will allow the construction of apartment buildings with the uniform frontage more traditional for the city than randomly placed facilities. Stores and services are planned on street fronts and local passageways on the ground floors of the apartment buildings to create a lively residential street environment. Stores, cafes, hairdressers, bank branches – all retail and service outlets – will not only be within walking distance, but right in the building. This is a totally different comfort level. In addition, as regular customers, building residents will be able to control the quality of goods and services in the neighborhood by voting with their rubles.

If a Metro station is planned near the housing, then multiservices, recreation areas and mini-office jobs useful to the residents will be concentrated around it. In fact, it will actually be a transport interchange hub, not necessarily very large. This will develop small businesses and increase the number of jobs.

The final image of the neighborhood should have its own personality: original building design, varied finishing and infrastructure. Each building will have its own architecture and exterior. Manufacturing involves copying of individual elements, but not to the extent that an apartment building (like the five-storey buildings today) and even whole districts literally copy each other. There will be no landscapes indistinguishable from one another in post-renovation Moscow. Old Khrushchev-era apartment blocks have no architectural value and make urban areas faceless. Our goal is to bring back the individuality of Moscow’s districts and find a balance between beauty and practicality.

What will the new urban areas built during the housing renovation project look like? Among other things, this will be determined by the architectural design and urban planning competition that started back in April. What makes this competition special is that the five winning projects will not just look good on paper. Moscow will build real urban neighborhoods with them.