Nadezhda KOSAREVA. We cannot do without economics

President of the Institute for Urban Economics Fund, professor of the Higher School of Urban Studies at NRU HSE

Executive Director of the Institute for Urban Economics Fund

The Moscow housing renovation program is a pioneer project and, if properly implemented, will ultimately work for the benefit of the residents. The main goal of the resettlement is to upgrade the capital’s housing stock, replace old buildings with apartments that are equipped with all necessary amenities. The main benefit is renewal of the urban environment as a whole. Is renovation only a Moscow story? Or does the capital need to be considered as a testing ground before renovation is launched in Russian regions?

Almost all Russian cities need redevelopment of the built-up areas, but cannot afford these projects. What are their needs and capabilities? we will consider these issues from the perspective of an economist, since renovation, like any other urban planning project, affects the economics of the city and vice versa.

A new stage of renovation of built-up areas which is objectively required started in 2012. As a result, we have a huge shortage of investments in maintaining and renovating residential areas that become dilapidated.

The importance of this issue is now being gradually recognized. New strategies are being developed, specifically, a priority project to enhance the quality of the urban environment. Many large cities implemented isolated redevelopment projects. However, this limited experience shows that these practices still come with a large set of issues. An example of a new strategy on the level of a city is the Moscow housing renovation program, which is targeted at dealing with such issues and which makes it unique.

The issues of urban renewal of built-up areas of Russian cities include the following:

Are other cities capable of tackling these issues? Given the low level of land rent in the city, programs for comprehensive redevelopment of area cannot be implemented without significant budgetary costs. But the municipalities in these cities often do not have the money to implement such projects. Therefore, there can only be targeted investments to maintain some decent level of the urban environment. 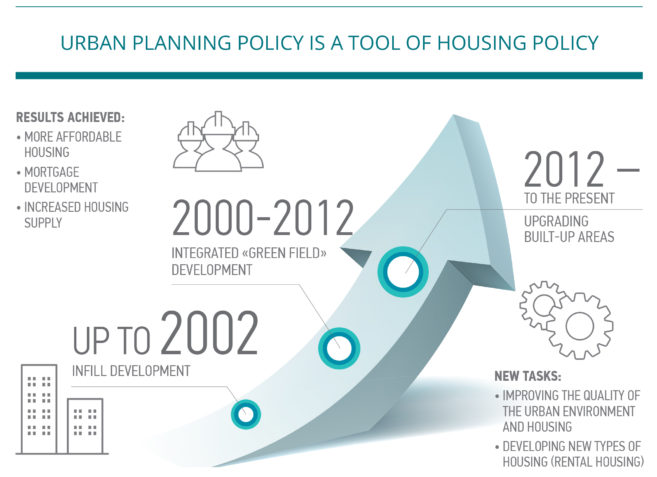 The Institute for Urban Economics has assessed the potential for redevelopment of built-up residential areas in 73 cities with a population of more than 250,000 people. The area to be renovated cover 66,000 ha. More than 260 million sq. m of housing can be built in these areas, which corresponds to the volume of construction by professional developers in these cities for about 15 years. Conclusion: demand is huge, whereas the number of implemented projects is small, the share of integrated projects is minimal and isolated projects dominate.

Given this implementation, the investment attractiveness of the projects is obviously low, which is coupled with the issue of so-called «non-liquid assets» (part of the decaying area around the isolated redevelopment site). In other words, the project itself creates non-homogeneous development (or increases it). Moreover, in future this means net costs for the budget, because no private investments can be raised for such «non-liquid» assets. As a result, we have an unreasonable waste of the potential land rent.

There is a significant financial gap between the demands and resources of cities to develop and maintain the urban environment. We still have no additional sources for the city to withdraw land rent: no charges for issuing construction permits and infrastructure that are levied in many foreign countries, and real estate taxes are relatively low.

It is impossible to finance not only the redevelopment, but also current maintenance of public infrastructure with the use of current budget income from city assets (land tax and property tax). And this is bad. We do not have continuous investments in the urban environment, and this results in its inevitable decay and a gap between the changing needs of society and economics. 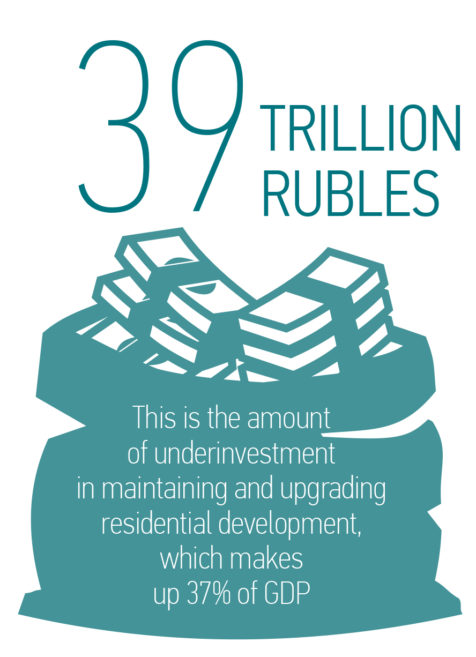 It would be wrong to think that after the renovation program is complete, you can forget about maintaining its effects. Investments within the framework of renovation are investments in building up city assets, which must be maintained. While not all cities today have the required land rent for renovation, more resources will be needed to renovate larger assets in future.

Meanwhile, there are tools for managing land rent to finance investments in the renewal of built-up areas:

The economic source of funding programs for renovation of built-up areas is land rent, which is obtained either in the long term after the project is implemented (in the form of taxes, then the project is financed with borrowed funds) or at the time the project is implemented (income from projects, including partial income in the form of a payment for the right to conclude a redevelopment contract at a tender). For example, over 10 years of implementation of development projects for built-up areas in accordance with the Town Planning Code, no one learned how the initial tender price should be set depending on the project parameters, i.e., potential returns rather than the cadastral value of the land plot (as all cities determine it).

There are many arguments over the increasing density of development under redevelopment projects. A transition to high-density development is a trigger for economic processes and the opportunity to substantially increase the comfort of residents (it goes without saying that certain conditions must be met, such as a balance between the height of a building and the width of a street, as well as between private and public spaces, and access to the real estate for residents, including the apartment residents and commercial tenants). There is absolutely no need to increase the density only by increasing the number of floors. This can be done with effective layout solutions, including arrangement of neighborhood development as successfully shown by the architects who who took part in the renovation project tender in Moscow.

In addition to economic restrictions, there are a large number of physical restrictions on implementing required projects in practice. Overcoming these restrictions requires not only urban planning skills, but also legal and managerial ones. This is the agenda of the first stage of the renovation program, which will start after the concept is selected. For example, the non-homogeneous development and a large proportion of buildings that will be preserved in the area being renovated prevent us from dealing with the increased density of the road network. This means that we must find ways to solve the problem of redistribution of areas from existing facilities in favor of the road network (e.g., through a buyout or delineation of the boundaries of land plots). There are quite a few of these practical issues. 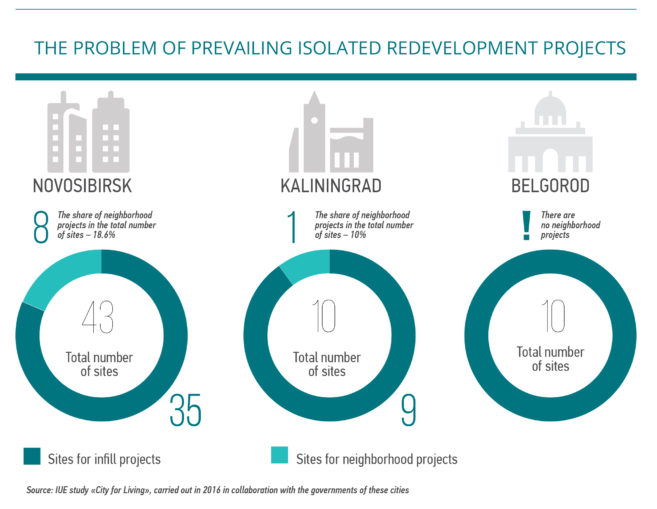 All of the issues described above are common to absolutely all cities. It is especially worth noting that these issues will be much harder to tackle with in other cities, because these cities do not have their own laws, and the Civil Code still does not provide an adequate tool. Extending Moscow’s authority under the renovation program is the correct approach. You might well consider the expansion of authority for other cities in this respect, at least for large cities.

A methodology of economic evaluation of projects and new tools, i.e., inclusive urban planning regulation, is widely used abroad under redevelopment projects. There are no such skills or tools in Russia yet.

It is commonly believed that economic calculations during the preparation of development projects are limited to such trivial figures as amount of investments, internal rate of return, etc. It is important to fundamentally broaden the horizon and include qualitative assessment of all possible effects of each project and of the program as a whole. It is important for a city to understand,which effects a project or a program may have on its budget income and expenses, on small business markets and housing supply for its residents.

Everything or almost everything (of course, with variations for set parameters, i.e., with a certain degree of probability) can be calculated. An economic evaluation provides guidance for the subsequent daily management of each project and program as a whole: under which circumstances and what specifically should be adjusted, how to avoid risks to the budget and the city’s economy. Such calculations should become routine for preparing and implementing any redevelopment project.

Using a specific pilot area in Moscow as an example, the Institute for Urban Economics has developed a unique economic model which allows you not only to calculate the amount of investments, structure and sources of financing for the project, but also to obtain a conceptually new qualitative evaluation of all micro- and macro effects of the project – from calculation of standard ROI to an assessment of the project’s cost-effectiveness for the city budget, its housing sector and the city’s economy in general over 15 years of program implementation.

As a result, this modeling helps to perform economic evaluation of various architectural and planning solutions and determine the best urban planning solution by guaranteeing the investment soundness of the project.

Just as importantly, the model continues to work at the stage of daily management of the project in future owing to special tools for stress testing of various managerial decisions depending on specific future market conditions, which are difficult to predict today.