Deputy Director of the Urbanika Institute for Territorial Planning, professor at the International Academy of Architecture, Moscow Branch

One of the main reasons for traffic problems in Moscow is an imbalance between the spatial distribution of residents and workplaces. The concentration of workplaces in the downtown area has reached an extremely high figure of approximately 2.5 million. The city has virtually exhausted its transport capacities to service these workplaces. If the number of workplaces continues to grow, the city transport system will not be able to service daily shuttle migration. A solution is required which will help to radically change the situation.

The fundamental proposal is as follows. Moscow must set up large public and business districts where the business function will prevail. It is advisable to locate these centers at the intersection of highways and railways and newly built ring structures, i.e., Moscow Central Circle and Third Interchange Contour of the Metro. The main flow of commuters from peripheral areas of Moscow and Moscow suburbs who go to work every day will be caught in the middle of the city. In other words, the average route to work and back to the place of residence will be reduced significantly.

Integrated design and a special program are required to set up modern business districts. There are two ways to achieve this result. On one hand, it is possible to force out offices from the Central Administrative District by raising tax rates and rents for the premises. On the other hand, lease incentives may be granted in new business districts. Only large corporations and wealthy people can afford area where rental rates for commercial real estate will be raised, whereas areas with lower rental rates will become more attractive for medium- and small-sized companies. 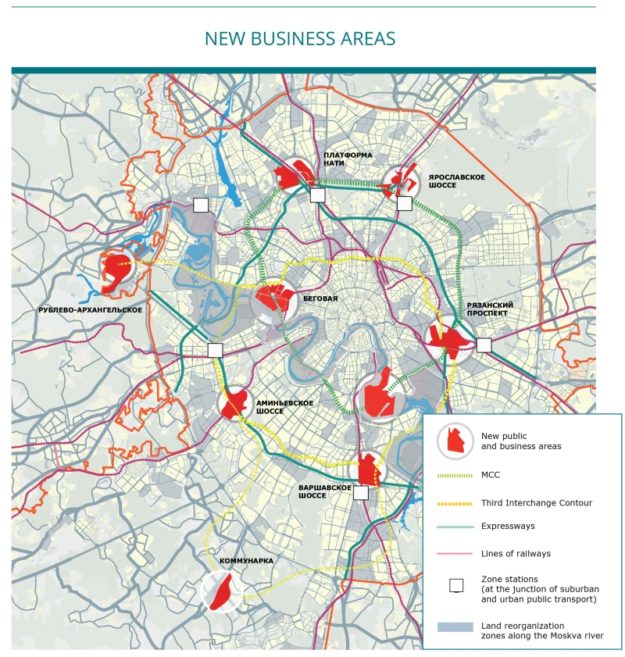 It is no surprise that in order to initiate the process, areas for relocation and pilot offices should be ready: the city should take on site preparation itself, while private investors can participate in the construction of office and residential buildings.

Business districts mean areas with residential and public buildings, offices and public spaces.  It is crucial that these functions are preplanned, and the main one is the availability of workplaces. Such business centers are designed for 250,00-300,000 workplaces each. In other words, the density of workplaces in them is 6-8 times less than in Moscow City, for example which also helps to prevent traffic havoc.

It is reasonable to assign new business districts special legal status simillar to the status of advanced development zones (ADZ). The specific aspects of the ADZ legal regime are a simplified procedure for expropriation of lands for federal needs (such as Federal Law No. 43-FZ and the Olympics Law) and preferential tax treatment (with respect to land tax and property tax).

Sites freed from offices in the central part of Moscow may well be used for residential development. Over 2.5 million people lived downtown only a few years ago. Today, the figure is 800,000. The downtown should not be empty or dead, it should be filled with life. It goes without saying that downtown housing is the most expensive, but it was, is and will be in demand.

The development of new business districts together with the appropriate tax and rent policy will help to lessen the load on the Central Administrative District in terms of the density of workplaces by halving it and significantly improve traffic flows. According to the estimates, new business areas will draw 55-60% of the workplaces.