Since the announcement of the renovation program, the authorities have acknowledged that the density of five-story developments (that is, the number of new square meters per hectare of urban land) will inevitably increase. The option of resettlement, when the former owners of Khrushchev-era apartments will get new apartments with the same area, for some reason was not considered. At first, this was explained by the fact that the apartments in prefabricated five-story buildings were small and uncomfortable, so the city should develop higher quality new buildings for relocated residents. This idea has already been entrenched in the bill on renovation: due to the expansion of utility areas, the apartment will be bigger and urban density will increase.

However, the authorities decided that the new apartments should have other advantages besides a larger area. The bill contains mechanisms which will make the renovation housing construction attractive for  investors, and the city itself will try to recoup its costs by selling additional «square meters». Now the question is how much more housing should be built?

The answer depends on the goals and appetites of potential investors, primarily the city, and possibly developers. Due to the very liberal application of planning regulations, savings on the cost of land and connection to utilities, the city can increase the density of buildings slightly – about twice.

Whereas this figure  in five-storey neighborhoods is currently about 8,000-10,000 m2/ha of housing, in new buildings for relocated residents (and for sale), the density will increase to about 20,000 m2/ha. If the authorities want to recoup the costs, but also earn, then the upper limit of density will depend solely on investors’ appetites.

Private developers will be in a less favorable position than the city: they will not only have to allocate part of the apartments for resettlement, but also incur higher starting costs.  Already, in most large-scale projects in the mass housing segment, the housing density is 25,000-30,000. m2/ha.  Depending on the proportion of apartments for relocated residents in a residential complex, the density will increase even more. Thus, with the involvement of developers, this indicator could increase by 3-4 times in the area of old five-story neighborhoods.

What will these thousands of square meters actually look like Is this a lot or a little? The existing standard for density of settlement in Moscow varies in the range of 20,000-25,000 m2/ha. 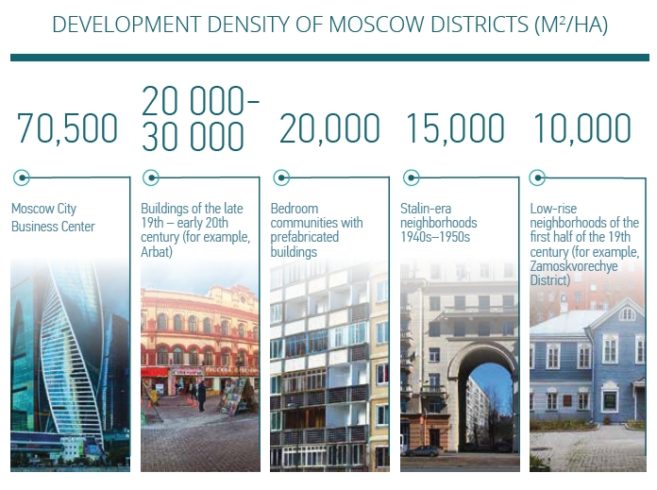 Not only the size, but also the structure of new neighborhoods is important. As planned by the authorities, urban blocks will appear in place of Khrushchev-era buildings – new buildings will be positioned on the perimeter of the neighborhood, forming a private area inside it. If the housing density reaches 25,000-30,000. m2/ha, the number of floors will be about 15-25.

In general, this model corresponds to the majority of projects that are currently being implemented by Moscow developers in the mass housing market, and even an increased housing density up to 30,000 m2/ha in some areas will not transform Moscow into Shanghai.

But the anxiety is not caused by the aesthetic consequences of renovation, but by the possible economic ones. Even if the density of new neighborhoods increase within a conservative estimate, this will put market a huge volume of housing on the market. According to the authorities, the new housing area for relocated residents will be 15 million sq. meters, while another 17-18 million will be put up for sale over 15 year. That is, on average, each year the primary housing market will be replenished by one million or more square meters.

Meanwhile, according to the results of Q1 2017, the total supply of new buildings in the capital amounted to 3.7 million sq. meters, and this figure is constantly growing, as the supply of apartments increases faster than the demand for them. The authorities’ desire to recoup the costs of renovation (not to mention attempts to earn money on it) could lead to long-term price depression due to oversupply. The private development sector will have to deal with a formidable state competitor controlling a quarter of the market and capable of amending building regulations and dumping due to lower costs.

In my opinion, the authorities should continue to renovate, without going beyond the framework of the social paradigm. Obsolete housing stock should be replaced with new housing designed exclusively for apartment owners in five-storey buildings. Of course, you can understand the authorities’ desire to make housing more affordable and avoid a social crisis because of the high cost of apartments that we see, say, in London. But is it not better in this case,to create a civilized market of affordable rental housing due to additional scope of the renovation program,  which was planned long ago?