Deputy Mayor, Head of Moscow City Services for urban policies and construction, on housing renovation as an integrated project for modernizing the city

Marat Khusnullin serves as the Head of the Moscow City Services for Urban Policies and Construction since 2013. His career had taken him from the laboratory of Kazan State Finance and Economics Institute, where he received a graduate degree, to the position of Minister of Construction, Architecture and Housing and Utilities of the Republic of Tatarstan. In 2000, he took advanced training at the Open University UK, majoring in Professional Management. PhD in Economics. Awarded the titles of Honored Builder of the Russian Federation and Honored Builder of the City of Moscow, the order «For Services to the Fatherland IV degree».

We live in the age of globalization. Today, 50% of world’s population live in cities, and this ﬁgure will increase to 70% by 2035. As one of the world’s largest urban destinations, Moscow is ﬁghting for human capital in the global competition of cities. The quality of this human capital – available, competent and educated – impacts directly the city’s competitiveness. We consider the renovation program as a tool to increase opportunities for city residents. The main goal of the program is to create an urban environment where it is comfortable to live and to work.

As a result of the renovation, new districts will be created offering new urban planning quality, new lifestyle and new economy. The project will allow the development of new practices regarding urban environment and public spaces’ creation, innovations in transport, infrastructure, construction and social policy. The Renovation program oﬀers a chance to revamp Russian industry. It is also an opportunity to improve the Russia’s capital overall architectural outlook and raise the level of its culture.

The program involves integrated planning of areas by districts and blocks. This development concept will allow more rational and eﬃcient use of urban land. We expect the new housing created within the Renovation program will be competitive in quality with professional real estate development projects.

A total of 1 million sq. meters of housing is in the ﬁnal stage of construction and adaptation according to the renovation standards. First new apartments will be offered to Muscovites in Q1 2018. Other 236 sites with urban development potential circa 3.5 million sq. meters of real estate are in progress. Moscow is ready to launch the ﬁrst wave of resettlement under the Renovation program. The City has laws, building capacity and the necessary tools to this purpose. However, the housing renovation program must be considered in the broader sense. Renovation is not just about demolishing obsolete Khrushchev-era apartment blocks and replacing them by new buildings. It is also a project for comprehensive modernization of the city and enhancing its opportunities. By implementation of the housing renovation program, the Moscow authorities are accomplishing several tasks at once: at once: expansion of the Metro and the whole transportation system, urban regeneration of industrial areas, and creating high-quality work areas and public spaces. The project concerns all urban development sectors.

Renovation is impossible without solving transport problems. The main goal of this work is to change the transport pattern in Moscow by making the use of public transport as comfortable as possible. We’re building subways, railways, intermodal hubs, road network, changing urban planning policy as a whole. This is the greatest achievement of urban development of any large city. 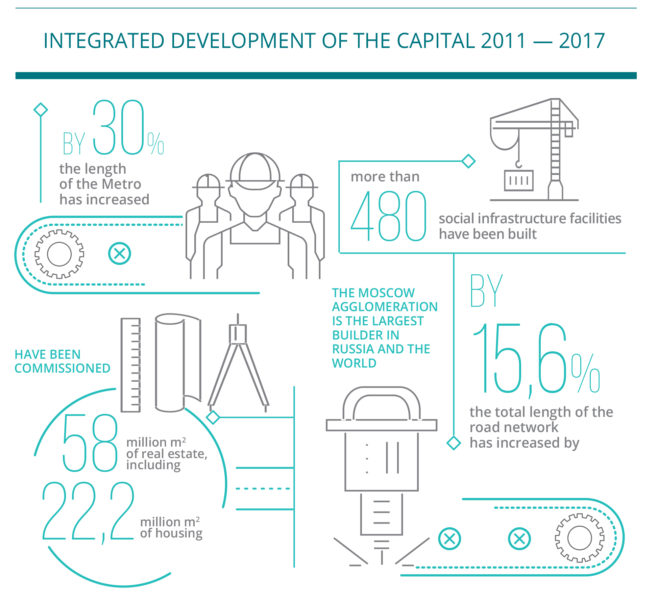 As a result of an unprecedented Metro expansion project, the Moscow subway network has already increased by 30%. In 2018-2021, there are plans to start up 137 km of lines, 60 stations and eight electric engine houses. The launch of

passengers’ service on the Moscow Central railway Circle (MCC) led to the establishment of about 300new transportation itineraries around the city,reducing passengers’ travel time by more than half. The area around the MCC covers 10.8 ha and has huge urban development potential.

The Third Interchange Contour (TIC) is the most ambitious project in the history of the Moscow Metro, the main result of which will be optimization of traﬃc ﬂows. The second contour will integrate all existing and planned radial directions and will become the longest subway line in the country and perhaps the world. The completion of the construction of the TIC is scheduled for 2020.

Interaction between Moscow City and Russian Railways Company on rail transport development will aﬀect not only the city, but also the whole Moscow agglomeration. In the long-term period,

the volume of rail transport will double. A total of189km of railway lines have been constructed and reconstructed in seven years, and 224 km of new or renovated lines, six new stations and ten engineering facilities are in progress for the next three years. The new high-speed rail system will have routes for transit trains linking the capital’s satellite towns. New radial routes integrated with the Metro and the MCC will reduce travel time by half on average, with an interval between trains during rush hour of six minutes.

The capital’s largest road project is construction of chord urban express motor highways. The North-West and North-East expressways and the Southern belt expressway actually form a new ringroad. The length of the entire road network in Moscow have increased by15.6%, and the number of engineering facilities (overpasses, bridges, tunnels) have increased by a third. A new approach to the development of road infrastructure has produced results: in 2017, traﬃc fell down by 6%, and the average speed of motor vehicles increased by 13% compared to the previous year. The improvement might be small but without these construction efforts, the city would already have ground to a halt in 2013.

Another component in the expansion of Moscow’s transport system is the construction of transport intermodal hubs. The TIH net work will allow the integration of all of the city’s traﬃc arteries into a single system. The hubs have a total urban development potential of 14.5 million sq. meters. Capital TIH will have multipurpose complexes that will include multi-level parking, public areas, shopping and recreational centers. This will make transfers more comfortable for passengers and create new jobs near the transit hubs.

We regard the renovation program for industrial areas as a crucial urban development project to return areas in the city center to Muscovites. The develop-ment of industrial areas provides an opportunity to realize urban development potential without densifying existing buildings. Obsolete production facilities will be replaced by Metro and road networks, comfortable modern residential areas, business centers and business parks for work, as well as sports clusters and recreational spaces. Former depressed areas will be involved in the city’s economy. 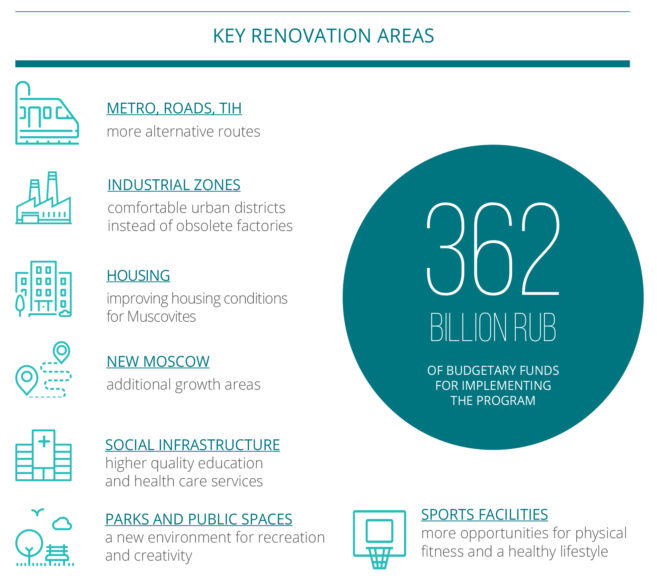 New Moscow is an innovative development project being implemented with new approaches, with a focus on an integrated solution for urban development tasks. This strategy agrees with the principle of poly-centric development of the capital. The main develop-ment driver of the added areas is the creation of new jobs and business centers.

The current level of Moscow’s social safety network is one of the highest in the world. More than 480 social infrastructure facilities have been built in the capital in seven years. In the next two years, 72 schools, 56 kindergartens, 62 healthcare facilities and 20 cultural facilities will be commissioned. The pace of this construction will undoubtedly contribute to improve the quality of education and healthcare.

As the capital of the 2017 FIFA Confederations Cup and the 2018 FIFA World Cup, Moscow has created powerful incentives for the construction of sports infrastructure. In seven years, 85 sports facilities have started, and 40 more will be built by 2020. After the World Cup, the stadiums will become centers for ﬁtness and sports, healthy lifestyle promotion. The targets of the city authorities and the interests of the majority of Muscovites converge on this issue.

Creation of a new cultural environment in the city is a key priority for government. Development of the areas adjacent to the Moskva River includes the construction of 24 new bridges, 120 km of embankments and 40 new public spaces. This year, the Russia’ capital became the owner of a world class recreational space, and next year the «Dreams’ island» – children’s attractions  park will open to complete the Zaryadye landscape park success. In only seven years, 80 new parks have been created and 140 streets have been landscaped in Moscow.

The Moscow agglomeration is the largest builder in Russia and in the world. The pace and volume of construction are growing year by year. In seven years, about 58 million sq. meters of real estate, including 22.2 million sq. meters of housing, have been commissioned in Moscow. The city has been committed to housing renovation for the last 18 years. However, the previous municipal program was focused on selected sites. The goal of the today’s program is to create a new lifestyle. This program means completely diﬀerent approaches to urban design.

After benchmarking international experience, we see that so far Moscow is the only one in the world to dare to rebuild a large part of the city in order address the housing problems of more than one million people. And the new image of Moscow will be unlike any of other world’s major cities.