The topic of the renovation of the capital’s housing stock blew up the Moscow Internet The flood of information in the media and social networks and the mass of expert comments beat all records for the number of hits on the Internet. After it became central to the discussion, the topic of resettlement of five-storey apartments buildings put the discussion of other significant urban projects on the back burner, such as  construction of the Third Interchange Contour, the reconstruction of Luzhniki Stadium, startup of the Moscow Central Circle and the opening of Zaryadye Park. Why did it happen and why is it still happening to some extent?

Since April 2017, the Stolitsa Social Research Agency  has been conducting weekly monitoring of posts in the media and social networks that are related to housing renovation in Moscow. Analysis of the information allows us to single out the main trends in the opinions voiced online, track their dynamics and identify the reasons for the main changes.

Between April and June, the number of information waves against the renovation program prevailed over the number of waves in support of the project. Interest to the subject soared on April 20, when the State Duma approved the Law on renovation on first reading. In May, a preliminary list of five-storey apartment buildings to be demolished was published, and a rally was held against the passage the draft law on renovation. These events triggered the largest wave of public anger on the Internet between April and September. In June, the number of waves with negative publicity decreased but still outnumbered the positive ones.

Starting on July 1, after Russian President Vladimir Putin signed the Law on renovation, the information waves in support of the project started prevailing over the negative ones, which was mainly due to the decrease of the latter.

In the following months, the number of information waves grew slightly in connection with the publication by Moscow authorities of the final list of apartment buildings included in the program for resettlement from five-storey apartment buildings. By September, the overall interest in housing renovation dropped significantly compared to April and May, but still remained strong.

The media profile was generally sinusoidal and marked by alternating peaks and troughs. This dependency is typical of manipulation and a planned information campaign. Since the graph of negative publications prevailed over positive and neutral ones, this suggests a pre-planned negative information campaign on the topic of renovation.

The capital city status shifted the renovation topic to the federal level, while positive and negative myths took on the value of a social manifest. 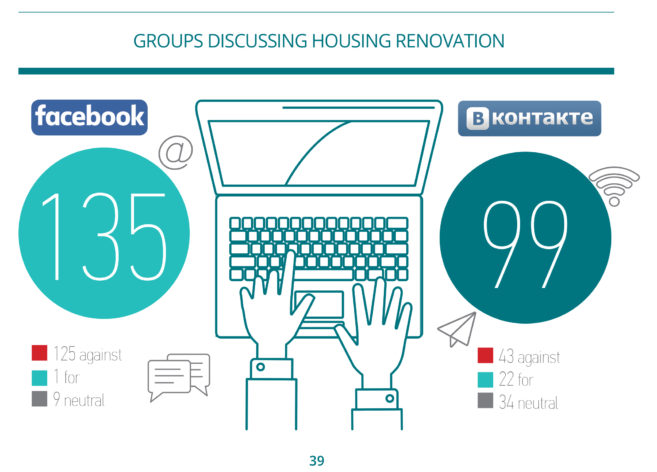 It is revealing that activists who were against the renovation made the most of the situation for their own PR and bombastic rhetoric about harassment by the Moscow city administration. They scolded the municipal authorities in general and the mayor in particular. If we consider that there were 2 – 3 times more negative posts than positive ones, in real life the situation is exactly the opposite.

Negative myths about renovation fulfill certain social objectives. For example, one of the objectives is the need to broaden the social base of protests and include a growing number of participants in real protest campaigns. To this end, opponents stir up the feeling of pervasive social injustice and unlawfulness of the actions of the Moscow authorities.

The publications by the authorities were entirely neutral and explanatory aiming at counteracting negative myths spread by opponents of renovation. Sometimes they even moved to increase the level of legitimacy of the adopted decisions by invoking the authority of the President («Putin ruled out resettlement by force from five-storey apartment buildings»).

An important aspect of the media profile is the dynamics of the number of participants in the groups discussing renovation in social networks. The data was gathered from two key Internet resources – F and VKontakte. Most of the increase in the number participants in the groups and of information waves occurred from March to May. Using the discussions about renovation as an example, the social networks confirmed the status of the thing in itself, creating an alternative information reality.

Along with actual voting results, which in the overwhelming majority of cases showed a positive attitude towards renovation, the social networks were dominated by negative sentiments. It should be noted that negatively minded groups in social networks were coordinated by same moderators and activists of the groups.

The users’ assumptions changed depending on the social network. F typically showed a far more negative attitude towards the activities of the authorities and better coordination and organization. The fact that most groups in this network are specifically set up to unite opponents of the project is shown by the names of  the groups and the nature of the publications.

The VKontakte network, on contrary, had more neutral and positive groups who were unrelated and localized at the users’ place of residence. We may conclude that the social reaction was more on VKontakte.  However, this was less prominent in the common information space. The reason for this was that it was not translated in high-profile campaigns and exaggerated news.

The renovation sparked strong interest and a wave of discussion in the expert community, with approximately 300 experts expressing their opinions in media outlets. No such high activity has been observed for any urban planning projects in Moscow over the past five years.

Although experts belong to different occupational groups, the set of assessments and explanatory models turned out to be very limited, wandering through both political topics and cultural aspects. The following groups of experts and their corresponding models may be singled out: