Alexander Vigdorov: no small details in our job14 february 2022

Alexander Vidgorov, Honorary Constructor of Moscow, has been architecting the Moscow Metro for over forty years. Currently, his team participates in the designing of several stations of the Big Circle Line and of the southern lines. In this interview, he reflects on the changes the Moscow Metro underwent over the last decade, delves into various aspects of station design, and talks about certain inner workings of the Moscow Metro that passengers usually don’t get the chance to see. 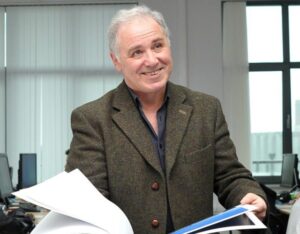 Interviewer: Alexander Lvovich, you have built metro stations under the plan economy and you still do it now as the Moscow Metro experiences explosive growth. What was new in your job over the last ten years?

Alexander Vidgorov: The pace and the scope of it, for one. Back in the day, we used to construct one, maybe two stations a year, and at this point, 57 stations were put into operation over the last decade. We have never experienced construction on such a large scale. Today’s pace can only be compared to the 1930s when the first stations were built from scratch, in record time, by people with no related experience. The people who delved into the work ten years ago were the survivors. In the 1990s, a lot of experts left the profession; there were no continuity in the trade, no new staff, and building and construction departments were closing down. Today, a lot of new people have come into the trade. They build up experience as they move along, too quickly, too, and it shows, sometimes. There are places where passengers see a nice picture, but real experts, if only they made two paces to the side, would notice multiple flaws.

I: Has the strategy changed in any way? Do you sometimes feel tempted to opt for standard design projects in order to speed up the construction?

AV: This is a utopian thinking. To build standard stations, you need standard urban planning conditions, standard geological situation, standardized blocks of flats in the area and standard traffic, too. This is obviously impossible in a city such as Moscow, and there is no sense anyway. In the 1980s, an attempt was made to bring the layout of deep stations to a common standard, but they only managed to standardize the utility areas and the ventilation system.

The design of Vystavochnaya defined the designs of the two Delovoy Tsentr stations of the Big Circle Line and the Yellow Line.

I: Is it true that some of the stations built in the recent time had been designed long ago and had been stockpiled in repositories?

AV: Well, yes and no. Some of the stations have indeed been planned a long time ago. That was sound groundwork for the new phase of construction. It is good when planners learn to think ahead and see beyond the next five years. We have to work in the context of optimization, in a sense that we try to make new stations smaller, sometimes we even give up on the escalators. But optimization requirements were there in the Soviet times, too. The project of Kaluzhskaya, for instance, included plans for the construction of a new line. However, the project was optimized, and the plans were never implemented. And so, when after almost forty years we started planning Vorontsovskaya, we had to go much deeper at the crossing of the two lines, and due to that the construction process turned out to be more complex and expensive than it could have been. As for Prospekt Vernadskogo, a possible connection had been included in the previous planning, which made our job much easier. Or to take the so-called portal to the unknown, that staircase on Leninsky Prospekt that seemed to lead nowhere. There used to be lots of theories as to why it was there. As we started constructing the Moscow Central Circle, the staircase came in handy: it became part of a nice and convenient cross-platform interchange.

I: What is creative freedom for a metro architect? Is there any?

AV: Architects have a great deal more creative freedom when it comes to the designing of entrance halls. We decide if they should be above ground or underground. Underground halls are usually constructed under busy intersections. If we opt for an above-ground entrance hall, we have a free hand to choose any forms we like, and see how the building matches the landscape. As for the finishing materials, they are defined by experience and by the standards of the customer. One example is granite; it is the most wear-resistant material of all, ideal for the finishing of floors. Marble and tiles, on the other hand, tend to crack easily, so they are not a good idea if the passenger traffic is heavy. Some materials just don’t look the same above ground as they do underground. That was the case with architectural concrete; it was approved for the finishing of a station, but the result was not what everybody had expected. And architectural concrete is quite expensive. So, the customer banned it from all of his projects.

The designer team led by Alexander Vidgorov planned the concepts of several stations of the Big Circle Line from Prospekt Vernadskogo to Zyuzino and from Rizhskaya to Aviamotornaya.

I: Have the import substitution measures had any effect on the choice of materials?

AV: There is now a mandatory requirement to use only domestically produced materials. The result is that the colors and sorts of marble we can choose from are not as numerous as before — the palette of Russian stones is not that wide. But there is an alternative, the so-called engineered quartz which is now produced in Moscow Oblast. It can be of the brightest colors, and unlike ceramic tiles, the dye does not wear off with time, because the whole mass of the stone is dyed through. The age of engineered quartz in the Moscow Metro has just begun, and I can tell that it will be in high demand over the next ten years. The illuminated line for visually impaired at the edge of the platform is usually paved with it; it was used for the decoration of the Mamyri station; ticket offices on the stations of the Big Circle line are faced with it, too. A new producer of lighting fixtures has recently appeared in Ryazan. Then again, we used to import aluminium from the Netherlands, Germany and Japan, and now there is a new plant in Moscow Oblast that produces honeycomb metal panels, perfectly suited for ceilings.

I: Are architects required to work together with artists?

AV: No, it is not necessary. If the artist is able to generate high-quality ideas and the architect manages to keep him or her in check, they can work quite well as a team, but it is not always the case. Once, I had to put in a lot of effort to dissuade an artist from the idea of a stained-glass ceiling. Yes, it is beautiful, but this beauty needs maintenance, very high maintenance in the case of stained glass. So, I decided to take a breather, and for now I work without artists. Some of my colleagues, however, have had more luck.

Vorontsovskaya is the first station of the Moscow Metro to be finished with engineered quartz. The orange color of the stone color-codes the transfer to the orange Kaluzhsko-Rizhskaya Line.

I: Some of the plans of the stations you designed included platform screen doors. Why were they not implemented?

AV: Well, such doors are planned for the safety of passengers. They separate the platform from the tracks when a train is not there. You can see such doors in the underground in Paris or in Tokyo. In 2012 and 2013, they were included in technical assignments. We had to design control rooms and plan for the possibility to install such doors, if not right now, then in future. However, the trains that are used in the Moscow Metro now are of different types with different doors, and the schedules of the trains do not allow for automatic screen doors. Perhaps this will be feasible on the Big Circle Line where all trains will be of the same type; the designed capability is there.

I: As an expert, what design elements do you think are unpractical in metro?

VG: Greasy metal chips from the tracks settle on horizontal surfaces and cover them quickly. For that reason, facings with small elements are out of the question: they are too difficult to clean. Such facings were used in the stations built before the war, but history showed that they are very unpractical indeed, even if they look good.

I: Do metro architects have assistants who are responsible for picking additional elements, such as lighting fixtures or benches? Or do you invite designer firms?

AV: No, the architect team does all the job. We even pick ventilation grids all by ourselves, let alone benches. It is because we set much store by it, in the first place. There are no small details in our job. The architect Fyodor Schechtel used to be just as meticulous; for his projects, he planned and drew everything by himself, and every detail was custom-made, even doorknobs.