The Sports as territories’ development driver 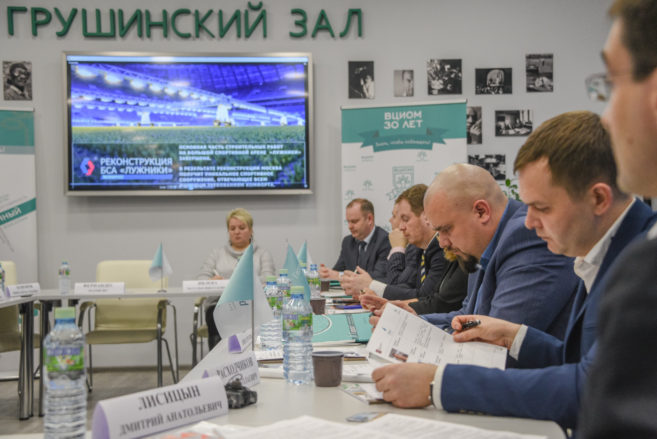 Experts and Government officials discussed Moscow’s sports infrastructure development in the run-up to the 2018 FIFA World Cup. The experts were presented with a study by the Russian Public Opinion Research Center regarding Moscow’s sports infrastructure in the eyes of the residents. The study showed which were the most popular sports in the capital, what were the reasons for choosing gyms and what was the Moscovites’ attitude to the upcoming World Cup 2018 in Russia. 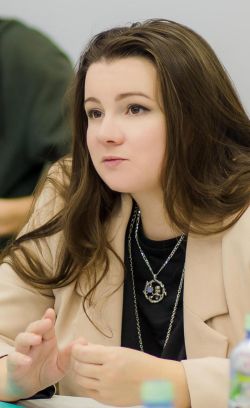 The round table participants focused on the reconstruction of Luzhniki, the largest Stadium in Russia and Europe. This ambitious project was launched in 2014 and will be put into operation in the first half of this year. Quite a few innovative approaches to construction have been applied in Luzhniki reconstruction, said Galina Gordyushina, Civilian Facilities Design Director of Mosinzhproekt JSC, the general contractor and general designer of the project. It was especially difficult to fit a completely new, contemporary “content” into the existing boundaries and to preserve the historic character of this building which has become a “calling card” of the Capital. This task has been fulfilled in full: today, Luzhniki Grand Sports Arena meets all FIFA requirements and will become one of Europe’s largest and most advanced stadiums. The number of spectator seats has been increased up to 81 thousand, and the stands’ slope has been changed so that each seat has the “best” view, the pitch has been planted with natural grass and maintained by sophisticated engineering system year round, and the roofing has also been replaced in full with modern material. In addition, the reconstruction resulted in building a viewing platform with the best views of Moscow, and Moscow residents will be able to see the score and replays of the best shots during matches at the LED screen of Media canopy (the entire dome of the protruding part).

Anton Pavlov, CEO of Architectural Bureau SPEECH, called the Luzhniki reconstruction project “the know-how feast”. He told the round table participants about architectural solutions found while working on the project to solve one challenging task: to create a comfortable environment for guests of the sports complex without changing the building’s original look so dear for Moscovites.

The discussion participants were quite interested in discussing efficient use of sports projects to be built in the run-up to the 2018 FIFA World Cup after the international competition was over.

That was the task set for designers in reconstruction of Luzhinki Grand Sports Arena, noted Galina Gordushina and Anton Pavlov. The stadium is supposed to become a point of attraction for Moscovites and guests of the Capital, a site for family recreation and leisure, and even a wellness and educational center. Dmitry Lisitsyn, Head of Design and Survey Control Department, State-Owned Enterprise of “Luzhniki Grand Sports Arena”, told about landscaping and development of vast territory of the entire Olympic complex.

Other experts also noted the integrated approach to construction of large sports facilities in Moscow. Luzhniki, CSKA Stadium, VTB Ice Palace are multi-functional complexes which, in addition to sports arenas are also equipped with office, hotel, shopping and entertainment infrastructure, – said Aleksandra Savraeva, Director for Development, Sport Business Consulting magazine. Maxim Belitsky, Head of International School of Sports Management Project, agrees with her. However, according to the expert, many other Russian regions are not so readily use their stadiums’ potential as the attraction points for city residents, if compared to Moscow. 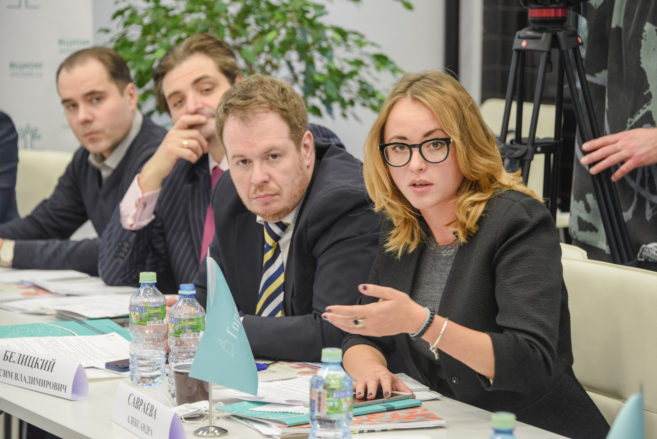 Economic efficiency and return of investments in organizing international sports championships also prompted a heated debate among the round table participants. Aleksandr Morozov, Director, Consulting and Appraisals Department, S.A. Ricci, Made a presentation of his calculations in respect of the World Cups’ value. The costs of holding the 2018 World Cup in Russia are among the highest as compared to those of other similar World Cup host countries.

Although according to the expert, no costs can be recovered in the short term, potential returns in the long term can be quite high because the bulk of those investments is made in upgrading communications, developing engineering, transport and social infrastructure. This also creates a favorable environment for business development.

The discussion also focused on the balance of the Capital’s sports infrastructure in general.

Kirill Rodin, Head of Social & Political Studies, Russian Public Opinion Research Center (VTsIOM), told the participants about results of the Study of sports infrastructure “Sports Moscow: Development and Potential” in the eyes the residents. Moscovites heard much about the upcoming World Cup (90%), and around 1.5 million fans are going to watch matches in the stadiums. 77% of Moscovites know about Luzhniki stadium reconstruction, including 83% of the respondents approve the project. Going in for sports as a way of keeping physically fit and having a healthy way of life is very popular among all groups of Moscow population, and the key criteria in choosing a gym are transport accessibility (51%) and low cost (50%). And the facilities meeting those criteria are not available sufficiently everywhere.

In this regard, Ilya Baksalyar, Chairman of the Management Board, RosMolSport, suggested that the focus should be on small gyms which could be equipped on the ground floors of buildings. Also, according to the expert, an innovative form of the “state and people partnership” can be used here, meaning that residents themselves become minority shareholders of those mini sports and recreation complexes and are interested in supporting them financially and in effectively managing them.