On July 7, 2017, the tenth anniversary discussion session of the City Moscow Urban Center took place during the VI Moscow Urban Forum (MUF). A three-hour discussion marathon on “Modern Challenges and Urban Solutions” was held at the booth of the Moscow Urban Development Policy and Construction Complex in pavilion 75 of VDNKh, where the business program of MUF-2017 was held this year.

The Forum delegates discussed the projects presented to them and took part in discussions on various aspects of development of the Moscow agglomeration.

Valery Fedorov, the General Director of VCIOM, opened the marathon by presenting the results of the activities of City MUC over the past two years – interviews with experts, results of opinion surveys, round tables and panel discussions were collected in a specially published almanac. 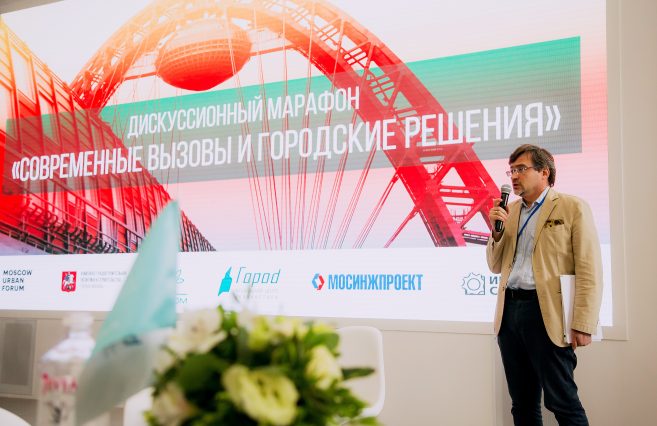 Timur Bashkaev, chief architect of the Moscow Central Circle, gave a presentation dedicated to a new paradigm of urban development. In his opinion, the existing urban development paradigm was inhibiting expansion of the Modern Agglomeration Center of Moscow. The Agglomeration Center must accomplish the main task of providing the maximum scope of services of the highest quality as quickly as possible. Without a dense developed Center, it will be impossible to achieve quality of the entire Agglomeration. But the urban densification that occurs in the existing paradigm of a “flat” city inevitably leads to a loss of quality of life due to the reduction of free urban spaces and the quantity and quality of greening. Today, each urban function, whether it concerns housing, the road network, greening, parking, maintenance or underground utilities, is assigned a separate urban area. A transition to a new urban paradigm of a “vertical” city is needed to ensure high quality of a high-density urban environment. This will allow the creation of multipurpose high-density development zones, in which residential and public functions can be combined in the immediate vicinity of transport hubs. The new urban paradigm will ensure sustainable development of Moscow while improving the quality of the urban environment. 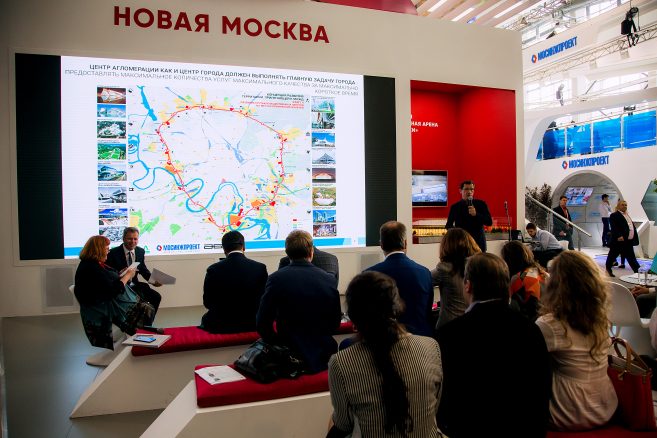 Sergey Nepomnyaschiy, Chief Architect of the Institute of Heliotecture, agrees with this approach. Modern urban solutions and technologies allow the creation of innovative urban development architecture and increase its density and efficiency without degrading the quality of life; on the contrary, it creates a completely natural landscape on the upper level of platforms free from traffic. As an example, the Garden Ring could turn into a full-fledged recreation area, and green spaces will appear on the floors of buildings. 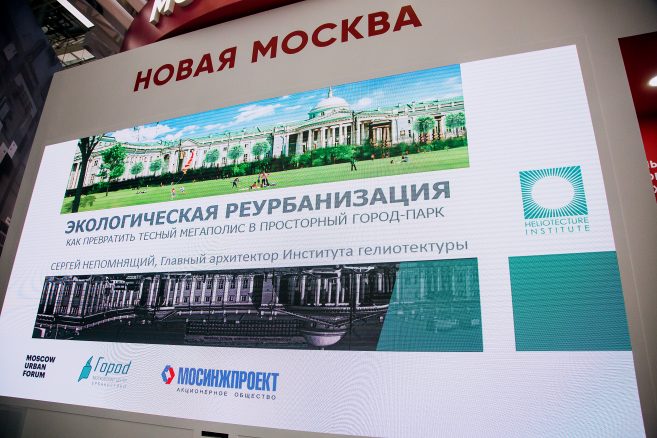 Maxim Perov, Deputy Director of the Urbanica Spatial Planning Institute, shared his concept of Moscow’s New Business Districts. He pointed to one of the main causes of Moscow’s transport problems – the imbalance between the spatial distribution of housing and employment, when the highest concentration of workplaces is in the Central Administrative District. He proposed a solution for this problem through the organization of large public and business centers with business functions predominating at the intersections of main highways and railroad lines with new ring structures, such as the Moscow Central Circle and the Third Interchange Contour of the Metro. Development of these business districts, combined with the appropriate tax and leasing policies, will decrease the concentration of jobs in the CAD by about half and significantly optimize traffic flows.

The presentations of many experts were devoted to integrated development and area development.

Denis Kolokolnikov, Chairman of the Board of Directors of RRG Group, talked about how redevelopment of Moscow’s industrial belt is progressing, using the ZILART project as an example. He noted that this is a real challenge, since it requires the creation of harmonious self-sufficient clusters based on the “City within a City” concept, in which all necessary functions are provided: housing, jobs, social, commercial and transport infrastructure; entertainment and recreation areas. At the same time, there are no single standards or unified rules for area development. These projects require a detailed analysis of the urban environment around the developed area, the preparation of forecasts and scenarios for its development, including calculation of the future “day” and “night” population of the area; and careful estimates of the required amounts and types of real estate, as well as optimal parameters for the premises. 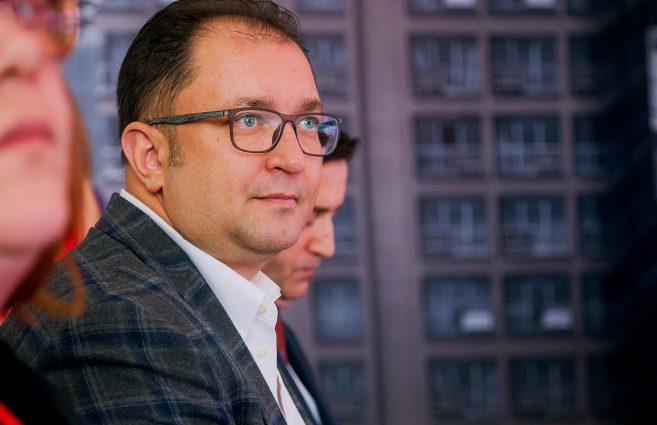 Irina Ilina, Director of the Institute for Regional Studies and Urban Planning at the National Research University Higher School of Economics, and her staff presented the “Health Park Life Line” project – a satellite of the International Medical Cluster at Skolkovo. This huge complex, spread out over 1000 hectares on the site of Moscow Stud Farm No. 1 in the western part of New Moscow, will become a center of attraction for Moscow residents, visitors to the capital from Russian regions and foreign tourists. The principles of integrated development of the area were fully applied in the design of this cluster: the formation of a balanced and polycentric settlement system, the creation of a high quality of life for the population and provision of the necessary level of employment for residents with workplaces for skilled labor; and preservation of a unique specially protected natural area.

Nail Saifullin, Development Director of Mosinzhproekt JSC, shared his experience in implementing another integrated project in New Moscow with the participants in a presentation about the administrative and business center under construction near the village of Kommunarka. The Kommunarka ABC with an area of 550,000 hectares is located 4 km from the Moscow Ring Road, which, together with the growing transport network, will provide the complex with a close connection to “historic” Moscow. Roads are being built here (including Kaluzhskoe highway and the Solntsevo-Butovo-Vidnoye road); two metro lines will be built to Kommunarka – an extension of the Sokolnicheskaya line and the Novatorov Street-Stolbovo line; and two transport interchange hubs will allow for convenient transfer.  There will be no “skewing” toward only housing in the Kommunarka ABC: out of about 4.8 million sq. m of constructed real estate, 1.3 million sq. m will be for housing, and 1.7 million sq. m for commercial development. The know-how for this project lies in the fact that the city decided to initially invest in creating a comfortable environment and then attract investors without subsequent encumbrance. 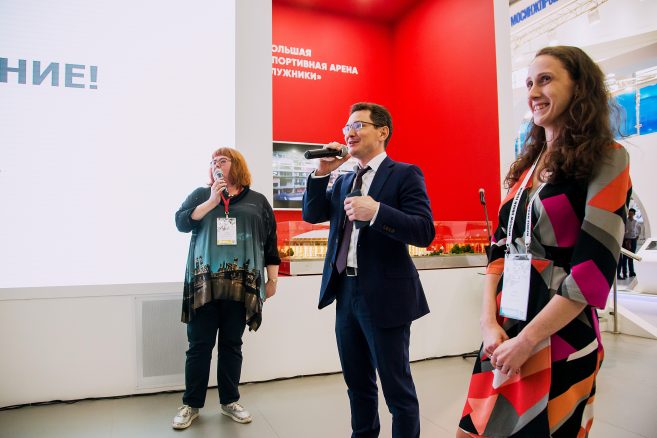 Yulia Nikulicheva, Director, Russia and CIS and Head of the Strategic Consulting Department of JJL, explained how the development of transport infrastructure affects the real estate market. International experience confirms that the development of public transport has a long-term effect on a local economy where there has been a significant improvement in transport accessibility. Russian experience shows that our country is also following this trend. Whereas even 15-20 years ago, market players did not have experience of assessing the impact of transport development on the real estate market and businesses and mainly noted the aftereffect from selling a particular object, after 2008, the local real estate market grew faster than expected in the 2- 3 years before the transport hub appeared.

Alexander Morozov, Senior Project Manager at AECOM, gave convincing arguments in favor of the integration of rail transport into the Moscow transport system. Electric trains 3.5 m wide with 12 cars have twice the space of subway trains 2.7 m wide with 8 cars. The city already has 200 km of railway lines, but due to the lack of rate, network and organizational integration, they are underused in the Moscow transport system. Investing in urban rail infrastructure operating similarly to the MCC (with tunnels under the city center) is several times more effective than investing in an outdated Metro that cannot cope with passenger traffic due to limitations on train size.

Andrey Barkovsky, advisor to the head of the Moscow Department for Development of New Areas, presented a gift to the marathon participants – the first copies of the newly published book “New Moscow. A City Convenient for Living”, which tells about the prospects and results of the five-year development of areas joined to the capital.

Прошедшие мероприятия
World Urban Forum (WUF 2020)
World Urban Forum (WUF 2020)
Moscow Government is going to present its exhibition stand at the World Urban Forum (WUF10), which will be held from 8 to 13 February in Abu Dhabi (UAE). In 2020, the main issue of WUF is Cities of opportunity: connecting culture and innovation. From February 9 to 11, an eventful business program including panel discussions, […]
EXPO REAL 2019
EXPO REAL 2019
Moscow real estate market is one of the most stable and rising throughout the world. Rapid development of urban environment attracts a great number of local investors as well as foreign colleagues. On 7 – 9 October, Expo Real 2019 was held in Munich. This is a unique event because the exhibition is focused on […]
PROESTATE 2019
PROESTATE 2019
The residential real estate market in Russia is actively developing. Significant changes occur at all levels: legislation, types of partnerships in the market, investor strategies, architecture and the general approach to the construction of residential real estate are changing. Experts of Moscow Centre of urban studies «City» took an active part in events of PROESTATE-2019 […]
MUF 2019. Educational Environment Architecture
MUF 2019. Educational Environment Architecture
What should be modern universities? How will new campuses and educational spaces change cities? Can institutions give rise to new meanings for society? These and other topics were discussed by experts and students of leading universities at the first design session “Architecture of the educational space” organized by the Trianon Dialogue Forum and the Fund […]
Transport framework of New Moscow – working and business perspectives
Transport framework of New Moscow – working and business perspectives
Transport and employment as top issues of new territories, Troitsk and Novomoskovsky districts of Moscow, were the focus of a panel discussion titled “Transport framework of New Moscow – working and business perspectives”, which was organized under participation of the GOROD Moscow Urban Center. The panel discussion took place at the TASS press center on […]
Modern Challenges and Urban Solutions
Modern Challenges and Urban Solutions
On July 7, 2017, the tenth anniversary discussion session of the City Moscow Urban Center took place during the VI Moscow Urban Forum (MUF). A three-hour discussion marathon on “Modern Challenges and Urban Solutions” was held at the booth of the Moscow Urban Development Policy and Construction Complex in pavilion 75 of VDNKh, where the […]
New Moscow: development alternatives
New Moscow: development alternatives
On April 12, the TASS News Agency press center hosted a discussion session of the Gorod Moscow Center for Urban Studies. The dialogue brought together experts in completely different domains – law-makers, real estate specialists, representatives of developers, investors, urbanists, economists, architects, sociologists and representatives of the Town-Planning Policy and Construction Complex. Experts, businessmen and […]
The Sports as territories’ development driver
The Sports as territories’ development driver
February 16, VCIOM (the Russian Public Opinion Research Center) hosted the Eights discussion session of the “Gorod” Moscow Center for Urban Studies, bringing together for a round table discussion heads of sports associations and public organizations, economists, urbanists, architects, sociologists, journalists, representatives of JSC “Mosinzhproekt”, Sports and Tourism Department of the Moscow Government, State-Owned Enterprise […]
Показать еще...