The participants of ARCH MOSCOW discussed the ways to balance the job situation in various administrative okrugs of the city to provide the residents with equal job opportunities close to their homes.

Projects that Create Jobs turned out to be a key session of the forum. The discussion was prompted by the relatively recent declaration of the Moscow government that the city would support local projects aimed at creating jobs within walking distances from the potential workers’ homes. The declaration was made in 2019. In 2020, several acts were passed that were intended to prompt investors and developers to create more jobs in residential estate development sector. The attending scientists, architects and urban planners discussed how this is being done. 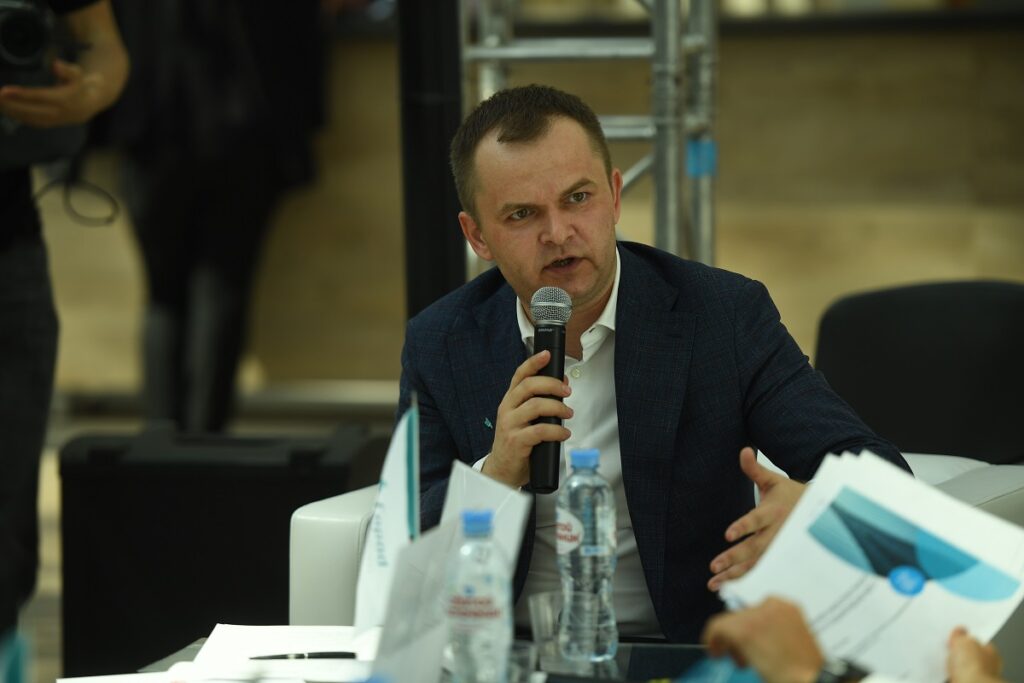 Aleksey Raskhodchikov, Chairman of the Moscow Center of Urban Studies “City” Foundation, opened the discussion by reciting some sociological data. According to him, over 60% of residents of any given district have to commute for work to other parts of the city. That is a heavy burden on the public transportation system, and is very time-consuming.

“The mayor has been raising that question over and over again. It could be solved by creating new jobs and better balancing the job situation in various districts,” Aleksey Raskhodchikov said.

Grigory Feofanov, Managing Director of Mosinzhinvest, talked about the potential effects of new transit hubs built in certain areas of Moscow. The construction of transit hubs at the junctions of major transport routes, such as the Big Circle Line, the Moscow Central Circle and the Moscow Central Diameters is a key activity of Mosinzhinvest. “Aside from their main goal of transport and passenger traffic redistribution, the hubs were planned to become attraction points in their respective districts. They could entail the construction of new shopping centers and recreation zones as well as create jobs for local residents. Such large infrastructure facilities could provide employment opportunities for up to 2,000 people, not to mention the expansion of the existing transport infrastructure, such as new metro stations,” he said. 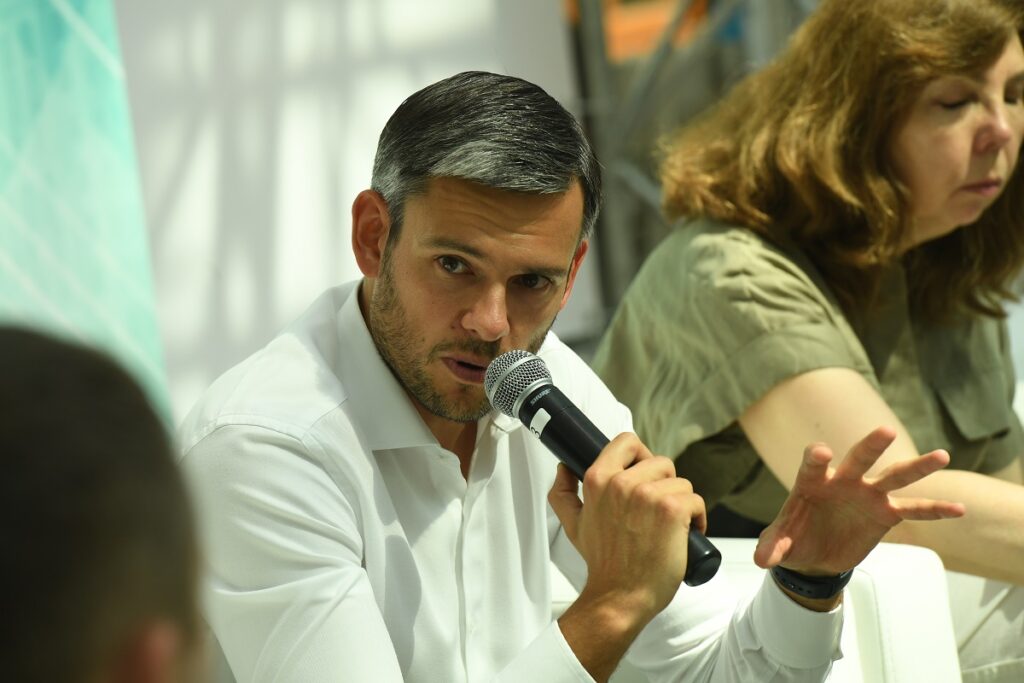 He cited the example of the recently constructed transit hub hear the Salaryevo metro station. The huge shopping center that is becoming increasingly popular among the locals was not a private initiative of retail companies, but a project specifically designed by Mosinzhinvest as part of the hub. Salaryevo used to be an end station of the Red Line of the Moscow Metro and a terminal for buses and taxis to Vnukovo Airport. Today, it is an interchange station, and the Red Line is being extended to the districts of New Moscow.

“We designed the hub as well as the whole area in a six to eight kilometers radius around it, including infrastructure and job opportunities for locals.”

Another example is the Ryazanskaya transit hub, which is a junction of four major transport routs. It includes the Nizhegorodskaya station of the Nekrasovskaya Metro Line, two eponymous stations of the Big Circle Line and the Moscow Central Circle as well as the Karacharovo station of the Gorkovsky suburban railway line. There is also an auxiliary U-turn overhead road.

Grigory Feofanov emphasized that Ryazanskaya is one of the Europe’s largest transit hubs with the estimated daily traffic of 600,000 passengers. It is designed to decrease the passenger traffic of the Kursky railway station and redirect some of it off the clogged central lines. The hub will provide multiple job opportunities, in the administration office and retail shops as well as in utility rooms.

One more example is the Petrovsko-Razumovskaya hub near the eponymous metro station. It is a junction of two metro and two railway lines and a future terminal for Sapsans (better known as Velaro RUS EVS) arriving form St. Petersburg. Engineers from the Japanese company Nikken Sekkei participated in the planning and designing of that project, which will include a 200-meter-high office tower.

Grigory Feofanov explained that the redistribution of passenger traffic was modeled on the basis of the Moscow Central Circle, which had been operating at its full available capacity at the time. Engineers of the Genplan Institute took part at the designing phase. The idea is to construct around 250 transit hubs of various dimensions in Moscow, and all of them will provide new jobs for locals.

The attending representatives of scientific community talked about foreign practices of city-planning. Irina Ilyina, Head of the Institute for Regional Studies and Urban Planning of the Higher School of Economics, used the example of Tokyo to explain how a monocentric megacity, such as the capital of Japan used to be, could become polycentric in its transportation structure. 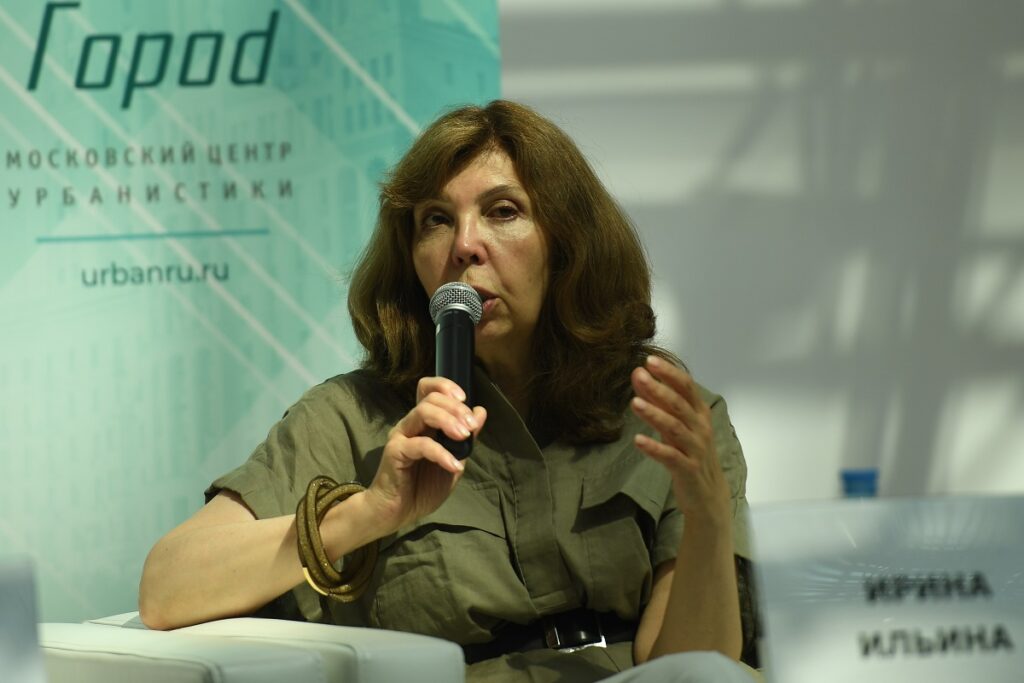 “The authorities singled out seven growth dimensions. The infrastructure facilities that later became attraction points for the population, were moved from the downtown to the periphery. Each new agglomeration has a distinctive character: there are research and development centers, university communities, medical clinics, industrial zones and recreation areas. In each of them, infrastructure was built and residential neighborhoods constructed for people who would like to live and work in the same district. The public transport development was aimed at reducing travel time, and that managed to drastically cut the commuting time in the first place,” she said.

Irina Ilyina noted that she, too, saw the future of Russian cities in forming such educational and scientific clusters. This is especially true for new university campuses. Today, many professions require getting practical experience from the first day of studying, and it is getting increasingly important that students could get such experiences doing a job close to the university. Ideally, it should be on campus, so that they could live, study and work in the same place.

“The today’s Tokyo is a polycentric agglomeration that comprises several distinctive clusters. There are no traffic jams anymore, because most people live and work in the same neighborhoods. This is a new structure that promotes a multifunctional development model.”

Elena Petrovskaya, Senior Lecturer in City-Planning at Moscow Architectural Institute, cited the results of a sociological research conducted by her students in several districts of major European cities. The research was funded by a big regional development company. Its bosses understood that the old-fashioned town-planning was becoming a thing of the past, and searched for new, out-of-the-box solutions. Elena Petrovskaya’s students examined eight districts of several socially-oriented European countries with a climate similar to that of Russia, mostly Scandinavian ones. One basic difference was the width of streets. In those countries, there were no streets wider than 25 meters, whereas in Russia, the width could be 30 or even 70 meters. Narrow, compactly-built streets create a feeling of comfort. Surprisingly, classic bedroom communities, such as the ones that have been so popular in Russia, are not uncommon in Scandinavian countries as well. Sometimes they also include a university and a campus. 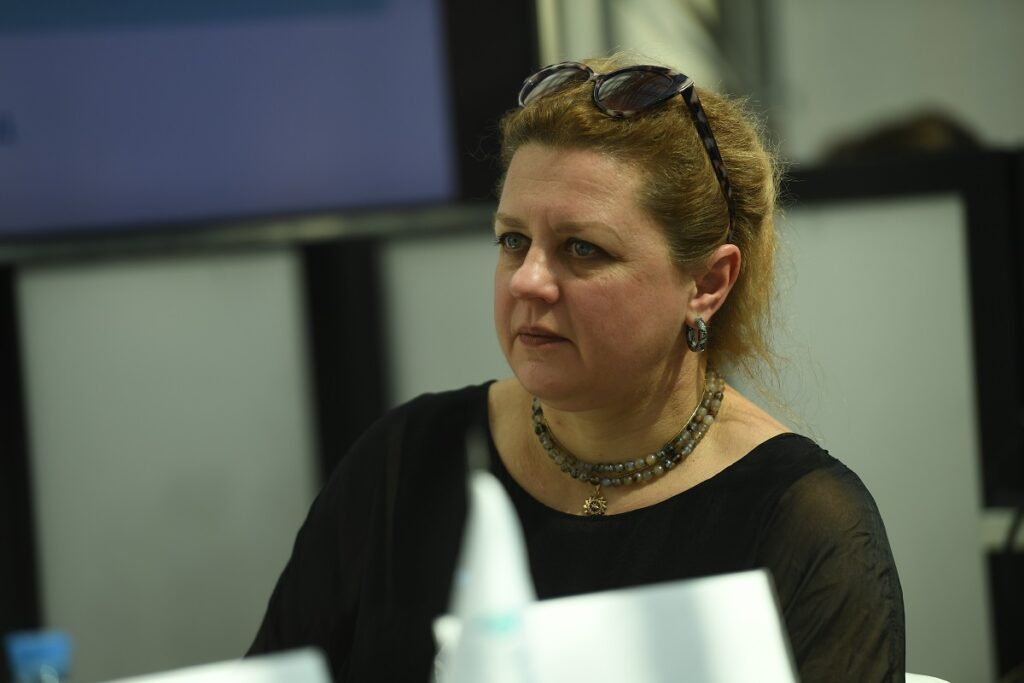 Having studied the experiences of those countries, the students concluded that, designing a new district, town-planners should give priority to pedestrians. The 15-minute city concept, which is basically applicable to neighborhoods of 100,000 to 200,000 residents, is also a must. Such neighborhoods are relatively self-sufficient and each have their distinctive character. They have something in common with the above-mentioned clusters of Tokyo.

“We need to revise our town-planning concepts. What we need to do first is to differentiate districts depending on their location within a city in general and in relation to university clusters in particular. The time of standard, old-fashioned town-planning is over.”

Vyacheslav Semerin, Chairman of the Real Estate Developers’ Guild of the Moscow Chamber of Commerce and Industry, picked up on the Scandinavian topic, citing the example of a neighborhood in New Moscow nicknamed Scandinavia. In his opinion, it is perfectly balanced for the Russian climate; it has pedestrian zones, recreation areas, children’s playgrounds, lots of greenery and a pond. 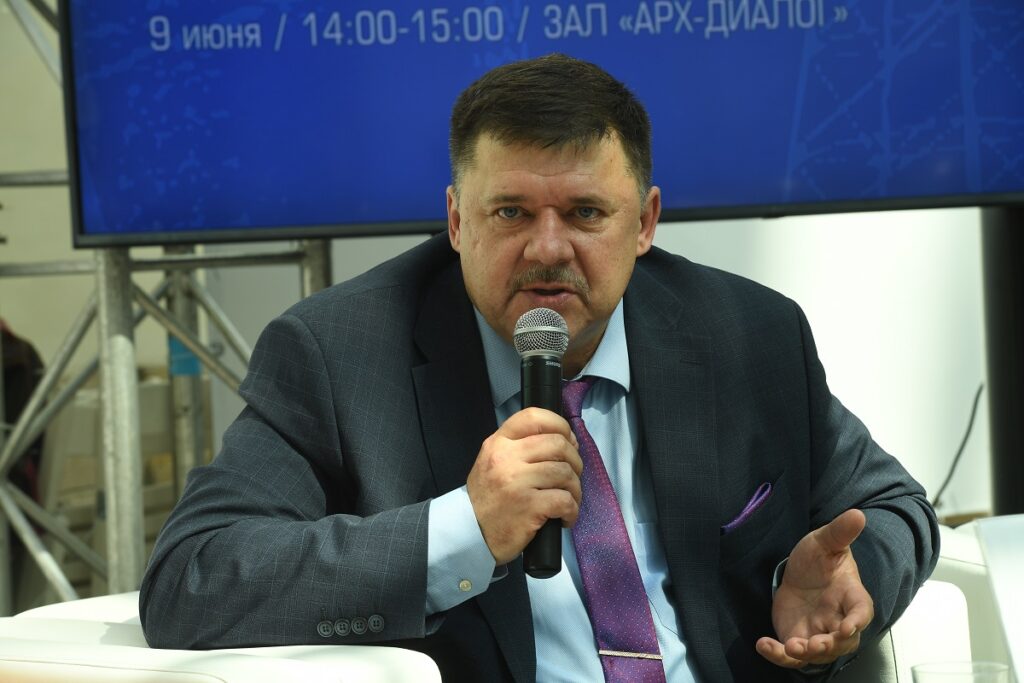 Vyacheslav Semerin also noted that small and medium-sized businesses often act as sub-contractors for larger real estate development companies in major construction projects, some of which are financed by the state. Unfortunately, such businesses are still poorly protected by law and do not have good insurance against bankruptcy in case of drastic fluctuation of prices for construction materials.

“Small and medium-sized businesses are the riskiest, and the situation in the construction sector is far from perfect. The prices for materials usually make up 70% of a deal, and if they soar, nobody is going to compensate for the losses. There are several acts that were intended to remedy that, but somehow is still doesn’t work for small businesses.” 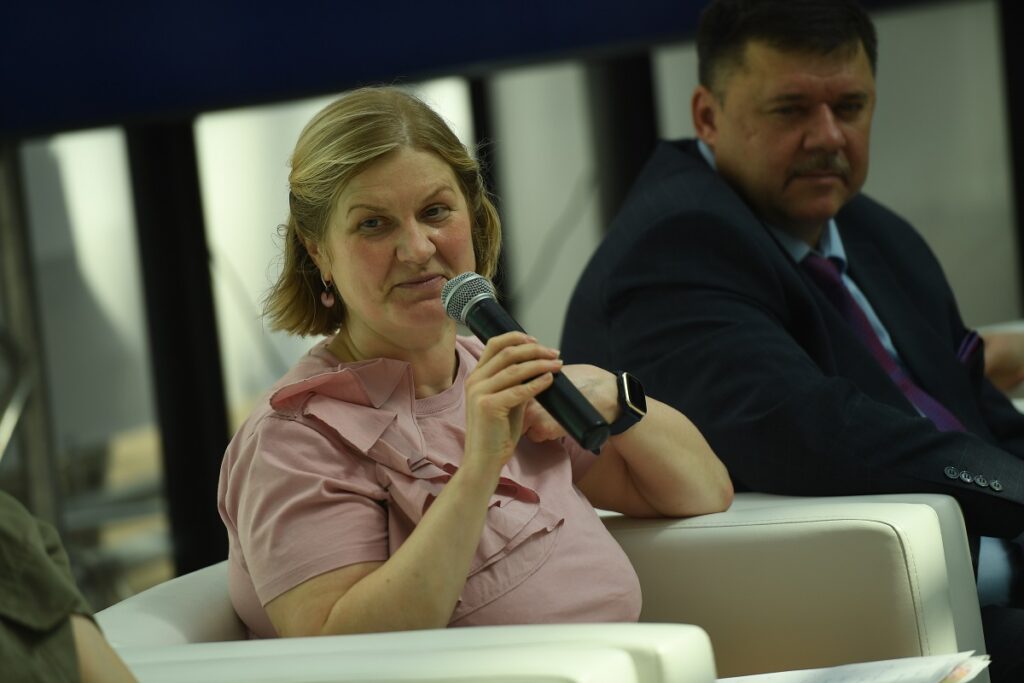 Creating jobs also means construction business centers. Today, as the construction sector has to deal with sanctions just like any other sector of Russian economy, the question arises of what changes it is going to entail. First of all, it is yet uncertain if new office premises are even needed, since many Western companies have left the Russian market. Second, it remains to be seen whether the office buildings under construction now are going to be completed. Perhaps some of them will go on the back burner or be abandoned. Yuliya Nikulicheva, Head of Strategic Consulting at Jones Land LaSalle, Inc. was able to partly answer those questions. In her opinion, the construction sector in Moscow was relatively healthy when the sanctions happened, and so the buildings under construction now will probably all be completed. The projects that are still in the designing stage, however, will be most certainly put on hold.

“We’re at the first stage of restructuring our economy now. Nobody knows how it is going to change and what the new logistics chains would be. The developers need to find out if there is going to be any demand for business premises, and when they know for sure, they will decide if the projects put on hold now are to ever be implemented.”

As for the state of the rental market, there is a window of opportunity for the companies that decided to stay in Russia. They can expand their sales premises at moderate prices or move to a better office. It is not the case for many, though, since part of the companies that have left Russia are taken over by the local management and will not need moving.

Aleksey Raskhodchikov concluded the session on an optimistic note by saying, “In recent years, there has been growing interest for people’s needs in the construction sector. This is a good trend. However, citizens of Moscow districts are taking their time to respond to that. In Europe, most of the success stories told by developers start with something along the lines of “We have met with the citizens and discussed their needs.” It has become a custom, and it would be worthwhile to promote such traditions here as well. Then and only then our districts will be greener and more comfortable for those who live there.”