The Moscow program for resettlement of five-storey apartment buildings triggered a mixed reaction from the population: some Muscovites welcomed the new project, while others opposed the authorities because they believed that citizens’ ownership rights and will are being violated. In September-October 2017, City Moscow Urban Center commissioned a qualitative study aimed at gathering and analyzing information about the implementation of the program and making key recommendations for tactical and strategic planning and preventing conflicts and social tension. More than 20 experts in different fields took part in the study: architects, developers, conflict experts, political analysts, investors. Interviews with the experts were the subject of the analysis.

If we summarize the views of the experts, the following key issues can be identified. The program does not meet the exigencies of modern times: the speed at which the renovation concept was devised did not allow formulation of another approach to changing city landscape compared to the 20th century. Ultimately, there was a mismatch between the new reality and old mechanisms designed to deal with the issues of this new reality. 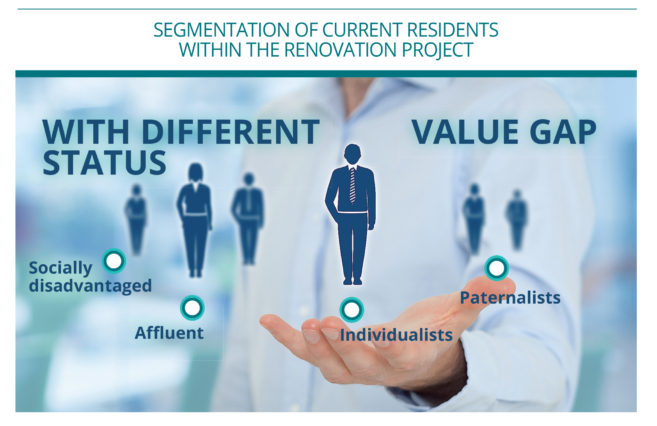 Given the differences in social groups in terms of values, property and social characteristics, the experts agreed that all Muscovites should not be gathered on one site (as is done now), but that socially homogeneous environments must be created. People should be offered their choice of environment, but for a fee.

The situation has leveled off over the year largely due to legislative initiatives, and the adoption of relevant laws; work with active citizens, residents and conflict experts; the partial change in tactics of the authorities; holding of public hearings and rallies.

The study participants acknowledge that at present, the level of social tension is within the acceptable limits and is not critical, but note that conflicts may reappear with renewed vigor.

Experts sketched out the causes of potential conflicts. For participants in the renovation program, these causes are related to accepting housing and a specific location and conditions of resettlement of various social groups; the repair of apartments at the expense of residents (will these costs be reimbursed?); and the possibility of entering into and leaving the program. The lack of information and mismatch of promises to the real state of affairs; different conceptual positions and misalignment of interests of the residents who joined the renovation (some have a sense of entitlement: let them give me what  they owe me, while others take the position of active citizens: I don’t need anything, I can buy what I need myself). For the residents of Moscow who are not participating in the program, issues associated with the construction of facilities for renovation and related infrastructure may serve as a trigger for conflicts.

Ways to build a dialogue between the authorities and the society. Undoubtedly, as the renovation project progresses, different collisions, different opinions and different holders of such opinions will emerge. According to the experts, the most important thing is the ability of the authorities to enter into a dialogue with society, organize a polylogue, solve problems together with the population subject to pluralism of views and positions.

In the opinion of social scientists and conflict experts, the process of discussing important topics and the development of public discourse is very important. Therefore, the following should be done when working with project stakeholders:

A dialogue is also necessary with residents who are not affected by the issue of renovation. The main issue in this regard is the lack of conceptualization of the program and linking the interests of different social groups: residents, developers, representatives of the Moscow Government, business and others. The insufficient elaboration of these issues meant that people either lacked information or had incorrect information. All of this provoked social tensions and conflicts at various levels.

The study participants suggest applying a systematic approach to renovation and considering a longer planning horizon during the program. Experts note that there must be a distinction between issues on the nationwide level and the citywide level. In their opinion, in order to prevent new waves of tension, proactive drafting of the necessary documents and guides for relocated people prepared using electronic and print resources may turn out to be useful.

The concept of future housing: a diversity of housing offers. Since project stakeholders include different consumers, the offers must be diversified. Experts have identified the requirements that modern consumers have for modern housing. These people are now working in a new environment. Whereas previously transport availability and commutes from home to the office were relevant for many people, the modern consumer is a flexible customer for whom the organization of living space is an important factor. These consumers can work remotely from their office and have a car. Therefore, access to highways and expressways is important for them. They wants to spend leisure time in their area of residence. The slogan of experts is that human capital must be related to the physical environment.

Respondents propose that a transparent system for the improvement of living conditions should be set up. In this case, participation in renovation is not just relocation but invariance and a plenty of opportunities to «jump 10, 50 or 100 meters» depending on individual capabilities and the wallet of modern Muscovite.

Renovation is an opportunity to create a comfortable urban environment. Standard panel and brick apartment buildings which were built en masse in the USSR from the late 1950s to the early 1980s, which are commonly referred to as «Khrushchevki», were designed to improve the living conditions of the average Muscovite who lived in barracks and huddled in a communal apartment. The mission of the new project is the same – to improve the living conditions of various social groups.

The position of the study participants on the density and height of the buildings is mixed. The first (largest) group of experts believes that the density of Moscow has already reached its limit and should therefore remain unchanged. They believe that an increase in density will lead to deterioration in the quality of life.

The second group believes that high-rises of over 25 floors can be built in the capital. The arguments are that increasing density contributes to the growth of economic activity. Today, we have a generation of people who spend most of their time at work and come home only to sleep. For them it is important to have social infrastructure in their area of residence, including recreational and leisure centers and the city food supply system.

The third group believes that some areas in Moscow already have a comfortable environment and we need to continue to maintain yard space and neighborhood development  created in Socialist times, especially facilities that have historic value. The idea of the proponents of this point of view is continuity, but with modern content and technologies. Finally, there are experts whose position is that a comfortable environment is a varied environment.

The basic concept of housing renovation, which is supported by all experts, is to create a beautiful and comfortable city. The respondents identified the most essential infrastructure elements in districts of the capital (both in new districts developed for people relocated from five-storey buildings and in the historic center). These include parking lots and access to highways and interchanges; kindergartens and schools; stores (different retail formats); first and second floors of buildings that are multi-functional and easily transformed into premises for different purposes (to rent out for small business, so you can adjust quickly based on the capacities of this particular neighborhood); parks and green spaces; children’s playgrounds, sports areas, fitness clubs, and cafes.