Chair of the Board of the Moscow Association of Investor

Is the renovation project a challenge to Moscow’s development market?

According to the authorities, the program for renovation of the old housing stock in Moscow will be fully implemented at the expense of the city budget without investors. And rightly so, when the state and Moscow authorities make a decision on an important social task and all the difficulties associated with resettlement of residents. I was involved as a developer in reconstruction of neighborhoods in the historic city center a while back. I concluded that it is difficult to build a dialogue between a private investor and a resettled citizen.

In addition, the private developer’s involvement is complicated by the fact that they need long-term loans for construction, and federal law does not allow land allocation to developers without an auction. However, according to the authorities, developers who have their own production facilities may participate as construction contractors.

Therefore developers are still observing the first steps of new urban project implementation. Our actions, which primarily involve a dialogue between investors and the authorities, will most likely being in the second stage of the program, when the urban areas are freed up. Specific cooperation principles have already been developed. It makes sense that the developers will be selected by city authorities. However, the selection conditions must be the same for everyone who wants to participate in the program.

Integrated development of the areas comes to the fore. Nobody will allow development of site with residential buildings only, even high-rises, even though this this is profitable for any developer. Renovation includes construction of modern neighborhoods of a standard density, a small number of floors and all the necessary social facilities and parking. The quality of building materials must also be high, and the finishing of apartments must correspond to the comfort class level.

A private developer who does not guarantee fulfillment of these conditions will simply not receive land for construction.Therefore, the project bidding criteria should include not only the business scale, but also the experience in implementing such integrated development projects and application of high-tech solutions. 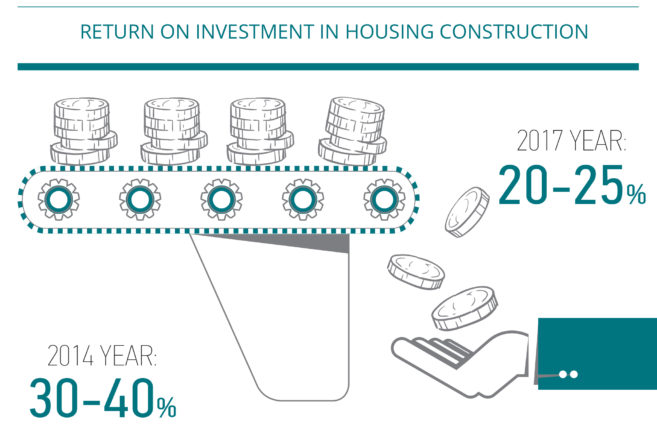 The most comfortable and profitable model for both parties – the city and the investor – is one where a certain proportion of the apartments in the buildings constructed by developers is transferred to the city for resettling resident, and some apartments are offered for sale. If housing is built for relocated residents only, profits are out of the question.

If the apartments in the neighborhoods where renovation will take place enter the market (although this may take a few years), there will be a noticeable drop in prices for new developments. The cost per square meter in buildings adjacent to the renovation areas may also be impacted by constant construction.

Many experts argue about whether the resettlement program for five-story buildings will conflict with other major urban development projects. I think it would be strategically correct to merge the two renovation programs – industrial and housing zones. It is not uncommon for districts that fall under different programs to be next to one another. However, private investments are always used for redevelopment of industrial zones, but the housing renovation program is financed by the city budget.

It is hoped that the housing renovation program will motivate the city to work more actively to reduce administrative barriers. It is necessary to speed up and simplify the receipt of the initial permits. During the time spent on paper work, when the market situations are changing rapidly, any project may lose liquidity. Another obstacle is the difficulty in connecting a facility to utilities, which is the responsibility of commercial organizations. Natural monopolies need to limit the period of connection to utilities.

When commercial projects enter the program implementation process, I would like to clearly understand the nature and structure of interaction, so the developers will understand whether they collaborate with the city, compete with it or among each either.