A new level of communication between the authorities and the population

The housing renovation program sets new benchmarks for the development of Moscow as a global metropolis for decades to come. The creation of a modern urban environment that is comfortable for living and work for millions of people is an extremely complicated and multifaceted task. Political, economic and social issues are closely intertwined here. There is plenty of room for architectural, planning and innovative solutions. The main challenge for the renovation program is apparently the interaction between the authorities and the population.

These heated discussions resulted in the adoption of a special law «On additional guarantees for housing and property rights of individuals and legal entities during renovation of the housing stock in Moscow». The law took most of the comments and concerns of the population into account. The decisions to include apartment buildings in the program were actually adopted during electronic referendum by voting on the Active Citizen portal.

Consequently, we are witnessing an unprecedented level of participation in managerial decision-making in modern-day Russia. However, if the renovation program triggered such active participation of the residents from the very beginning, what will happen when construction, resettlement and demolition of old five-storey buildings start?

To successfully implement the program, a fundamentally new level of interaction is apparently required between the authorities and the population, expert community and other stakeholders. It is almost impossible to create a truly convenient and comfortable environment for people without involving them. The rapid spread of the Internet in the urban environment and of the communication capabilities it offers considerably simplifies the task of continuous and quality interaction of the stakeholders.

It should be noted that this is not the first time the Moscow Government has faced the need to coordinate urban planning projects with the residents. For several years now, hundreds of major infrastructure projects are being implemented in the capital: Metro and road construction, reconstruction of stadiums and outbound routes, etc. During project implementation, conflicts with residents of of the areas where construction is carried out often emerge. These must be settled through various compromises.

Specialists of Mosinzhproekt JSC have developed  specific techniques for interaction between public authorities and the population with the use of modern information and communication technologies and successfully tested them on transport interchange hubs (TIH) projects. This is clearly shown by the successful experiment with electronic voting. 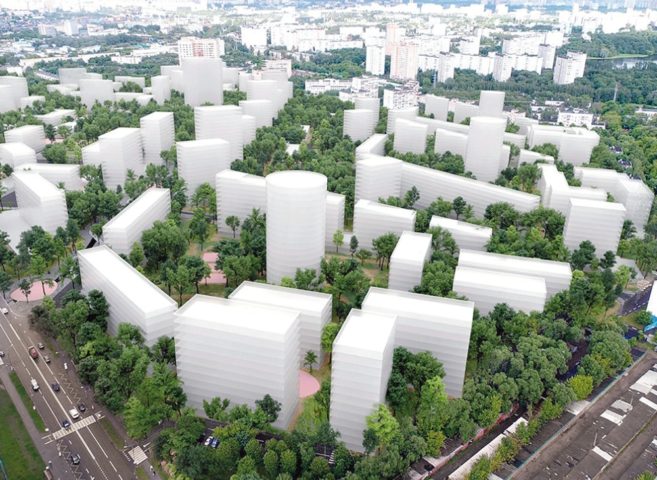 This method is based on social engineering techniques and represents a complex of interrelated activities, including:

The outcome of the discussions should be the development of new design and functionality solutions, including for integration of the project in the customary living environment of residents. Practice shows that the implementation of these activities helps improve the quality of urban planning solutions, prevent protests by people who live in the construction areas, and develop best practices of public participation in the development of urban planning solutions. The program activities are designed to provide support for problematic facilities (causing discontent of part of the population in the construction areas) at all stages of an an urban planning project, from predesign preparation to commissioning.

The Moscow Government set an ambitious goal to create a fundamentally new comfortable urban environment based on global best practices. The application of modern information and communication techniques of interaction with trhe population and other stakeholders makes it possible to bring the program to a new level. Environment and architecture significantly affect the behavior, attitudes and lifestyle of people. The active involvement of Muscovites in the development of a new urban environment can lead to more significant results, i.e., a change in the social environment of the Russian capital.